What use is nationalism? 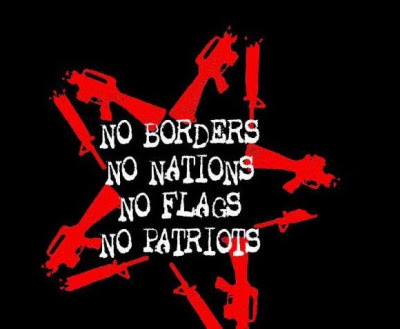 The message of socialism is worldwide. It reaches across the artificial national boundaries erected by mankind. and is as much for the ears of every worker. Poverty and inequality will last as long as the capitalist social system is in existence. The only way out is to establish socialism, which will organise the world so that everyone, whatever their sex or colour of skin, has free access to the world's wealth and stands equal to the rest of humanity. There is no place for vicious exploitation in such a society. That is the lesson for workers to learn all over the world.

It is no longer possible for the Irish defenders of capitalism to pretend that the poverty and unemployment suffered by the Irish workers are due to “foreign” government. So also in Scotland. It is better that Scottish workers should be able to realise that they suffer from exploitation just as much whether at the hands of Scottish exploiters or European and Asian exploiters. If Scotland’s workers see in national independence a solution to their economic problems they will—like the Irish and many others—suffer a grievous disappointment.  It is part of the task of the Socialist Party to work to destroy the present illusion and thus avoid future disillusion. Let Scottish workers organise not as Scots alongside their home capitalists, but as workers. They should reject the fallacious argument of political parties which urge them to do otherwise. In England, this fallacy is based on an old saying that “The enemies of my enemies are my friends.” In truth, the capitalist enemies of Scotland’s capitalists are not, and cannot, be the friends of the workers. If certain Scottish capitalists happen to be at loggerheads with some English capitalists, that is no reason why Scottish workers should imagine they have a friend in the Scottish employing class. The real task of Scotland’s workers is that of the workers everywhere—to fight against capitalism whatever the national flag under which it hides. The duty of socialists is to keep this issue always to the fore, not to rouse deadly national hatreds which obscure the class divisions in society and retard the growth of socialism.

This "internationalism" of the Socialist Party is in direct antagonism to that national sentiment which is fostered under the name of "patriotism."  As class-conscious workers, its members view any "nationalism" as a snare in the path towards emancipation. Not only does it serve to cloud the class issue within the nation, but it also hinders the workers of the world from recognising and acting up to their unity of interest. What significance has “pride” in one's nation for the wage-slave? The Socialist Party vehemently denies any connection between the interests of the capitalist and working people.

Internationalism will only have a sure foundation to the extent to which such illusions are ruthlessly cut out. The first step is to tell foreign workers frankly that with the best will in the world the amount of practical help that can be given is strictly limited, and therefore it is necessary for them not to build great hopes on succour from abroad to make up for their own weakness. The best help that the workers anywhere can give to their foreign comrades is to redouble their efforts to strengthen the socialist movement in their own country and hasten the day when the workers will control social affairs. Socialists intend to help build a world in which there will be neither exploiters nor exploited. We are interested in the resources of the whole world and we want them to be used for the benefit of all mankind without distinction of nationality.

The real division in the world is not between people of supposedly different “nationalities” but between two social classes both of which are international: a class of capitalists and state capitalists who own and control all that is in and on the Earth and a class of people who, excluded from such ownership and control, are obliged to work for an employer (private or state) in order to live. Wage and salary earners everywhere, whatever their language, legal nationality, skin colour, have a common interest.

The future lies with us, the past belongs to our enemies. They depend for their success upon the ever-diminishing working-class ignorance; we depend for ours upon the increasing working-class knowledge. Unlike those parties, which degrade the name of socialism, the Socialist Party and its companion parties have an unbroken record of loyalty to socialism and commitment to working-class internationalism in peace and in war. The truth is that the very essence of socialism is internationalism. Socialism knows no frontier. It matters little that one country may be peopled by any other nationality. That would make no difference to the movement of the working class towards the world-embracing cooperative commonwealth.

Posted by ajohnstone at 5:50 am