Comments on the Current Palestinian-Israeli Conflict 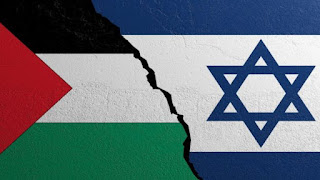 The World Socialist Movement's position has always been what happens to the workers anywhere is the business of socialists everywhere. We are not afraid of the charge that we are “poking our noses” into matters that do not concern us.

Once more, we see the Israeli-Palestinian conflict flare up and once again we noticed the skewed use of language by the media in its reporting of it.

Media likes to explain Israeli air attacks are in "retaliation" and a "response" to Palestinian rockets. Not that the Palestinians were reacting to the initial Israel aggression of police violence in Jerusalem with their feeble rockets.

But this is typical of the media dis-information.

One thing that the media so frequently asserts is that it is the Palestinians who are being the stubborn obstacle to the peace process. They are totally silent on the 2001 Taba talks:

“We made progress, substantial progress. We are closer than ever to the possibility of striking a final deal,” said Shlomo Ben-Ami, Israel’s negotiator.

Saeb Erekat, Palestinian chief negotiator, said, “My heart aches because I know we were so close. We need six more weeks to conclude the drafting of the agreement.”

It was a new Israeli government which walked away from the negotiating table, refusing to continue the peace talks because they were leading to a fruitful agreement.

But yet the Israeli propaganda message continues to prevail, blaming the Palestinians for a refusal to negotiate.

Hamas has offered Israel a peace deal which while not formally recognising Israel it does so in practice, agreeing to accept the 1967 borders and they stated so in their 2017 Charter. Hamas has advocated a Islamic form of a long-term and renewable armistice, the hudna.

Israel has rebuffed Hamas and will not enter into any direct discussions with them.

It is Israel who put up the hurdles to meaningful peace talks but not if you believe the media news outlets.

Israel is winning the propaganda media war by depicting Palestinians as “extremists”.

We see the same diplomacy tactic playing out against Iran. Who possesses the nuclear weapons – certainly not Iran but they are considered the nuclear threat and America and Europe make no demand for Israel to disarm its nukes, not even seeking access to inspect and monitor them by the IAEA which Iran was fully cooperative in doing.

Unlike the USA which offers the state of Israel unconditional support, refusing to use its substantial aid packages to the country as leverage to pressure it into concessions so to help reach a permanent peace, the World Socialist Movement does not give unconditional solidarity to Hamas despite our sympathy for oppressed fellow-workers resisting repression.

Hamas (unlike Hezbollah) possesses no military answer to match Israel’s power and the result of their inept rockets merely invites far deadlier counter-attacks from the IDF. Hamas is being counter-productive.

Perhaps that might be the real reason, the creation of innocent victims – martyrs or sacrificial lambs – so to boost Hamas politically as does Netanyahu's unproportionate use of force, a war crime in itself, to bolster his attempts to form a government coalition.

What can we can expect for the future? Recurring and intermittent protests by Palestinians for equal treatment and continual Israeli oppression to protect  Jewish Israeli supremacy.

It is not a promising prospect for our fellow-workers in the region.