"The year for action,”

There was a “relentless” intensification of the climate crisis in 2020, according to the UN’s World Meteorological Organization.

The coronavirus pandemic made the accelerating impacts of global heating even worse for millions of people. But the temporary dip in carbon emissions due to lockdowns had no discernible impact on atmospheric concentrations of greenhouse gases, the WMO report said.

Extreme weather events broke records across the world, from hurricanes and cyclones in the US and India, heatwaves in Australia and the Arctic, floods in large parts of Africa and Asia, and wildfires in the US.

“All the key climate and impacts information in this report highlight relentless, continuing climate change, an increasing occurrence and intensification of extreme events, and severe losses and damage, affecting people, societies and economies,” said Petteri Taalas, the WMO secretary general.

“This is the year for action,” said the UN head, António Guterres. “The climate is changing, and the impacts are already too costly for people and the planet. Countries need to submit, well ahead of Cop26, ambitious plans to cut global emissions by 45% by 2030.”

Richard Allan, a professor of climate science at the University of Reading in the UK, said: “What is notable is an emerging picture that climate change is gathering pace: [ice is] melting more quickly and heat is accumulating more rapidly in the ocean, while CO2 increases, which are driving these changes, are becoming progressively larger over time.”

Prof Chris Rapley, at University College London, UK, said: “The 1.5C Paris guard-rail is close to being breached. The way we are running human affairs is destabilising the climate system, with predictable and increasingly dire consequences. It’s time for an uprising of concerted action to fix politics – managing the climate crisis will follow.”

Peaceful environmental protesters are being threatened, silenced and criminalised in countries around the world including the UK and the US, according to 429 leading experts  from 32 countries, more than 70 other professors and including 14 authors from the UN Intergovernmental Panel on Climate Change (IPCC)

The letter states: “It has become abundantly clear that governments don’t act on climate without pressure from civil society: threatening and silencing activists thus seems to be a new form of anti-democratic refusal to act on climate … [we] therefore urge all governments, courts and legislative bodies around the world to halt and reverse attempts to criminalise nonviolent climate protest...We know that our research alone was not enough for this recent awakening to climate breakdown as an existential crisis for humanity, and recognise that protest movements around the world have raised the alarm,” the letter states, adding: “Those who put their voices and bodies on the line to raise the alarm are being threatened and silenced by the very countries they seek to protect..”

Dr Oscar Berglund, from the Cabot Institute for the Environment at the University of Bristol, explained, the attempt to “criminalise climate protest” was central to the fossil fuel industry’s new strategy of delaying action on climate change.

“Now that climate change denialism is in steep decline, they have put their money behind efforts to stifle dissent. Climate scientists, who have been subject to the slander of the fossil fuel lobby for so long, recognise this change in strategy.” 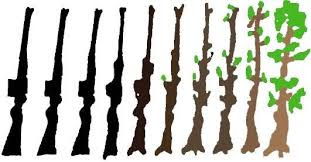 Posted by ajohnstone at 5:15 pm