May Day - Our aim remains the same

This world is run by a tiny group of people who own and control the wealth and power – the 5% that controls the majority. And they have at their beck and call a host of bought and paid for politicians that do their bidding. The economic system we live under exists to serve this small elite. In this society you don’t get rich by working hard, you get rich by having others work hard for you. In fact: the harder the work, the less you get paid.

Everything of value is the product of human labour; it was created by women and men working hard. The capitalists own the places where we work, we produce the goods and services and everything worthwhile – they get the profits. We are dealing with a class that is made up of parasites. Malcolm X was entirely right to say “Show me a capitalist and I’ll show you a bloodsucker.”

We have said many times that socialism is the sole solution for the problems of the world. The Socialist Party did not invent humanity’s aspirations for a just, egalitarian and free society; mankind have cherished such a dream for a very long time. Socialism is a movement based upon the historic evolution of the past and the economic conditions of the present. It is not, therefore, something that has been hatched in the brain and the imagination of some idealist philosopher. Socialism builds upon reality. It looks upon society as an ever-changing category, and it is able to explain why society has changed in the past and why it must change in the future. The reason why socialism is able to explain the past and the present and to foreshadow the future is because it establishes itself upon the facts of history and the truths of economic science.

Sadly socialism has lost in actuality and immediacy by the fact of being postponed to a far-off future. We believe that the emancipation of humanity from the age-long slavery of the class rule will be achieved in our own time. When we talk about the inevitability of socialism we assume that our fellow-workers will continue to struggle for their rights. Were they, on the other hand, to fatalistically remain tamely passive wait till socialism came to them, they would soon lose all the rights that they have now and become more slaves. When workers grow so class conscious and so well organised as to make their exploitation impossible then capitalists would have reached the end of their reign. That is what we understand by social revolution.

The spirit of the revolution is stirring once more. Society is changing more rapidly today than ever before in human history. Capitalism is rushing civilisation to its doom. Capitalist society is today clearly treading the road to the abyss. Socialism proposes the common ownership of all the means of production and distribution, the operation of industry in the interest of the whole people, the application of every machine to reducing working hours, the equality of all races and sexes, the abolition of poverty, the end of war, the economic freedom of every human being — and thus emancipated from the cruel and degrading thraldom of the capitalist system.

We seek to end the rule of the rich and build a socialist system – a system where all political and economic power is in the hands of the people. This is not a dream. Working people are the majority. We have every right to reorganise society in such a way that it serves our interests. Provided that we have the democratic organisation, determination, and understanding necessary, the future is ours. 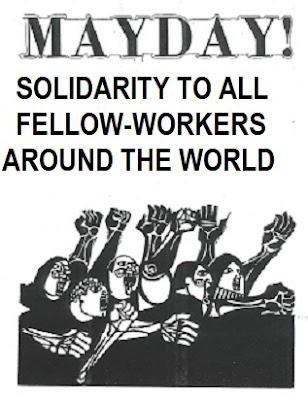 Remember on the 6th to cast your vote for Brian Johnson in Cardiff Central for the Senedd Cymru, Welsh Parliament, election.
And Max Hess and Andy Thomas in Folkestone for its county council election.
Posted by ajohnstone at 11:00 pm