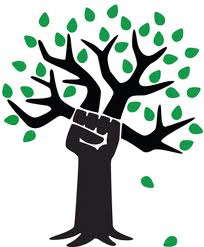 About half is made up of native tree species, such as oak, beech and ash, including centuries-old ancient woodlands. The remaining half comprises non-native trees such as conifers grown commercially for timber.

"Wildlife is going down - woodland birds, woodland butterflies, woodland plants are all going in the wrong direction for woodlands as a whole," Chris Reid, lead author of the report by the Woodland Trust, told BBC News. "This is down to factors such as pollution, invasive species, deer browsing and fragmentation - woods chopped up into small parcels. All of these need to be tackled."

Ancient woodlands continue to be lost and damaged by house building, new road and railways, the report says.

The Committee on Climate Change, the government's independent adviser on tackling climate change, has called for the planting of more trees and woodlands if the UK is to reach net-zero carbon emissions by 2050. It recommends increasing UK woodland cover from its current level of 13% of total land cover to at least 17%, and possibly to 19% by 2050.