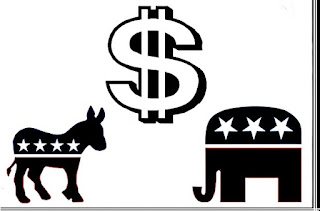 As part of Wall Street's "relentless push to influence decision-making" in Washington, D.C., the powerful financial sector spent a record $2.9 billion on campaign donations and lobbying in the 2020 election cycle, according to Americans for Financial Reform (AFR). The spending detailed in AFR's report likely does not represent Wall Street's total contributions, the organization noted, because $1.05 billion in dark money, with unknown original sources, was spent on the 2020 federal elections.

The historic sum was spent by Wall Street executives, employees, and trade groups, and included campaign contributions as well as lobbying expenses was to ensure lawmakers pass "policy that makes the already wealthy richer, and the rest of us poorer," regardless of which party is in power.