Did the Empire End?

Oman’s dictator, Sultan Qaboos, who ruled the country for 50 years from 1970 to 2020, was advised by a secret privy council right up until his death last year. Sultan Qaboos wielded absolute power, banning political parties and independent media.

He spent billions of pounds on British weaponry and surveillance equipment to fortify his regime, which is located on a key oil supply route between Iran and Saudi Arabia. Britain has around 90 troops on loan to the Sultan and three GCHQ spy stations are located in Oman. In the last years of his rule, Qaboos also agreed to let Britain build two military bases in the country to project its power in the Middle East.

It has emerged that his top advisers included seven current and former heads of MI6 and the U.K. military, a foreign office minister, a British oil executive, the ex-governor of the Bank of England, a special adviser to Princes William and Harry and one of Queen Elizabeth’s closest aides.

Six of the group are members of the House of Lords. None of them appear to have publicly registered their role on Oman’s privy council. The House of Lords code of conduct requires members to register “all relevant interests.” financial and non-financial. Several of the British privy councillors were involved in deciding Whitehall policy towards Oman whilst secretly conferring with Sultan Qaboos.

“Qaboos was always trying to pretend that he was an independent ruler, when in fact he was an agent of the British empire.”

Khalfan al-Badwawi, who was arrested and tortured after participating in Arab Spring protests in 2011, said:

“This is proof that British colonialism never ended. Omanis have long suspected that MI6 treats our country like it’s their back garden. These British privy councillors need to get out of Oman.” Al-Badwawi added: “It shows we are not only fighting the sultan’s regime. If we are complaining of repression or unemployment in Oman, the U.K. has a role in that. The sultan, with his British advisers, looted the wealth of Oman and we don’t have a say on anything.”

Oman’s privy council only came to light when the diary of millionaire Alan Duncan, a former Conservative MP, was published last week. Duncan secretly attended at least 14 sessions of Oman’s privy council from 2001, including while working for the British government as a foreign minister. Duncan did not declare in any of his parliamentary or ministerial registers of interests, travel, hospitality, gifts or meetings that he had attended Oman’s privy council. Instead, he listed his trips to the country as “strategic seminar[s] with the Government of Oman,” sessions on “inter-governmental relations” or saying he was a “guest of the Government of Oman.” The costs of Duncan’s flights and accommodation, worth thousands of pounds, were paid by the Sultan. Sometimes he received watches, cufflinks or a “traditional Omani coffee pot and incense burner” in reward for his advice. In the early 1990s, Duncan made millions of pounds as an oil trader and advised clients in Oman.  He also entered parliament as an MP in 1992 and since 2000 has visited Oman at least 24 times. Prime Minister David Cameron appointed Duncan as a special envoy to Oman in 2014, a brand-new position.  He was effectively in charge of U.K. relations with Oman and another Gulf dictatorship, Bahrain, due to his strong “personal relationships” with the rulers of those regimes.

Yet in his diary he describes the events explicitly as the “annual Privy Council in Oman, a one-day event at which senior officials from the U.K. give the Sultan privileged briefing on hot topics around the world.”

In 1995, The Sunday Times hinted at the existence of a privy council, describing Sir Erik Bennett as “one of Oman’s (and Britain’s) best-kept secrets: the key figure in a group of elderly former military and intelligence officers who help the Sultan to run his rich, strategically vital country at the mouth of the Gulf.” Bennett had continued advising Sultan Qaboos in some capacity until at least 2012, when the pair attended a lunch at Buckingham Palace with the queen and Foreign Secretary William Hague.

Stuart Laing, former U.K. ambassador to Oman says, although Bennett was working for Qaboos, the former Air Vice Marshall “was really quite patriotic actually in lots of ways and thought very strongly about British interests” – a comment which again indicates the extraordinary degree of British influence over Oman post-independence.

The British Cabal Behind a Gulf Dictatorship – Consortiumnews 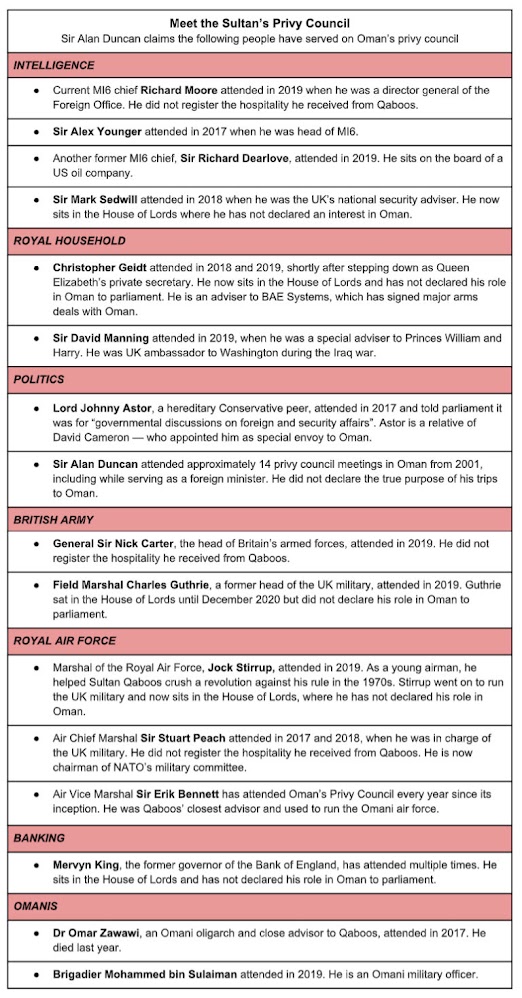