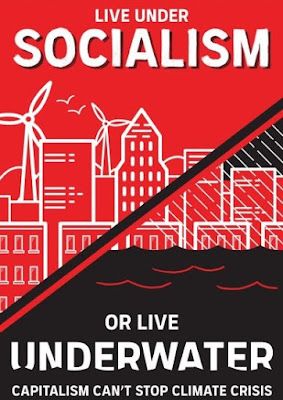 The climate emergency and the greenhouse gas emissions have unleashed heat waves, droughts, hurricanes, and other extreme weather.

Another problem is that the overheated atmosphere has in turn overheated the oceans, assuring a future sea level rise. As oceans heat up the water rises in part because warm water expands but also because the warmer waters have initiated major melt of polar ice sheets. There are various projections, mostly bleak.

Sea level rise is accelerating at a dangerous pace. In 1900, global sea levels were rising 0.6 millimeters a year. After 1930, as ocean warming and water expansion kicked in, the rate of sea level rise doubled and doubled again, reaching 3.1mm a year by 1990. Since then, as ever-warmer oceans have driven polar ice melt, the rate of sea level rise has quickened further. Today, oceans are rising 6 mm a year (over two inches a decade), and this pace will continue to dramatically accelerate. Two inches a decade may seem a trifle but remember: we are just at the beginning of this acceleration. The US National Oceanic and Atmospheric Administration projected in 2017 that global mean sea level could rise five to 8.2ft by 2100. Four years later, it’s clear that 8ft is in fact a moderate projection. And regional influences – subsidence, changing ocean currents, and redistribution of Earth’s mass as ice melts – will cause some local sea level rise to be 20-70% higher than global.

A global mean sea level rise  could be two feet of sea level rise by 2040, three feet by 2050 under worse case scenarios. Sea level rise of that extent will transform human societies the world over. South Florida, residents will lose access to fresh water. Sewage treatment plants will fail, large areas will persistently flood, and Miami Beach and other barrier islands will be largely abandoned. In China, India, Egypt and other countries with major river deltas, two to three feet of sea level rise will force the evacuation of tens of millions of people and the loss of vast agricultural lands. It would flood much of New York and Washington DC, Shanghai and Bangkok, Lagos, Alexandria and countless other coastal cities underwater. Sea walls and levees protections will be in deep trouble.

Sea levels are going to rise by at least 20ft. We can do something about it | Climate change | The Guardian