Eco-Fascism on the Rise 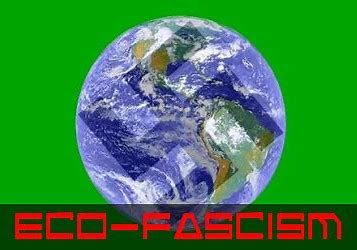 Tucker Carlson is the latest right-winger who tries to link restricting immigration as a means of protecting the environment.

“Unrestrained mass immigration has also put a huge strain on the natural world. Just the amount of pollution and litter and destruction that’s generated by the movement of hundreds of thousands of people, unrestrained, across the border. That’s not a small thing to me. But you never hear that. I’ve never heard anybody mention that. And it’s so awful.”

This is a repeat of his earlier claims that immigrants made the United States a “dirtier” country and were polluting the Potomac River.

He blames over-population for damage to the environment.

“We have about 100 million more people living in the United States now than we had 30 years ago. What does that do to the environment? ”

“Isn’t crowding your country the fastest way to despoil it, to pollute it, to make it, you know, a place you wouldn’t want to live?”

Needless to say, Carlson makes no mention of the environmental harm of building a huge wall.

It is a misguided belief which continues to be expressed by some parts of the environmental movement today that the root cause of environmental problems is population numbers couched in scientific-sounding terms as carrying capacity. Some eco-activists have become receptive to shutting down the borders, applauding population control and encouraging cuts in foreign aid.

It’s essential to ensure there is no confusion between population control and birth control: population control is the State domination over people’s reproduction while birth control involves individual women’s empowerment over their own bodies. Despite the history of  family control programs violating reproductive and human rights and the fact that there is already in progress a major slowing of global population growth, the focus on population is a mistaken one and leads to misguided action.

The World Socialist Movement has come across those in the environmentalist movement who promote the proposition that climate change is somehow driven by too many people and we have criticized them for inadvertently endorsing a racist eugenic program. Population growth, they argue, is responsible for environmental break-downs. Blaming environmental problems on population pressure is now all too common among environmentalists who still promote the view that population size is the primary cause of environmental problems.  Some right-wing extremists have infiltrated the green movement with attempts to link it to “nature worship”, full of Nazi “blood and soil” symbolism.

This article in the Guardian  is worth quoting  from.

“...We’re seeing the far right really take up ecological arguments again,” said John Hultgren, a Bennington College environmental politics professor and author of Border Walls Gone Green: Nature and Anti-immigrant Politics in America. “The rise of eco-fascism, I think, is very real...You can be a genuine environmentalist and a genuine xenophobe – the two often do converge,” stated Hultgren.

The Guardian article explains that “...Anti-immigrant ideology has been part and parcel of the whole of American conservationism since the first national park was founded, in part to protect wild yet white-owned nature from Mexicans and Native Americans. National purity and natural purity were inextricably linked. The current rise of eco-minded white supremacy follows a direct line from the powerful attorney, conservationist and eugenicist Madison Grant – a friend of trees, Teddy Roosevelt, and the colonial superiority of white land stewardship...”

“...Environmentalists were hardcore eugenicists. They were as committed to racial thinking as they were to protecting the great redwoods in California,” said Heidi Beirich, intelligence project director at the Southern Poverty Law Center.

Richard Spencer advocates for a kind of conservationism in the white nationalist tradition. Right-wing pundit Ann Coulter claimed Americans will have to choose between a “greening or browning” of America. Such claims  provide ‘intellectual’ succor to the mass-murderer, Patrick Crusius, who targeted Hispanics and killed 23 at El Paso in Texas, sharing with the Norwegian mass shooter Anders Breivik and the Australian Brenton Tarrant in New Zealand, the ‘Great Replacement’ racist ideas.

Eco-xenophobia surfaced in the 1970s as overpopulation and resource depletion was deemed the foremost problem facing the planet. Global population growth was soon conflated with immigration growth. It was a belief that  inspired a network of anti-immigration within the ecology groups.

John Tanton, a local Sierra Club official, founded the Federation for American Immigration Reform to advance the overpopulation as an environmental harm cause. He went on to co-found the Center for Immigration Studies. Tanton, who warned of a “Latin onslaught” that would hurt America’s culture and the land.

“Deep Greens” in the 1980s and 1990s argued that humans were an invasive and destructive species.

Activist David Orton argued that limiting immigration “from a maintenance of biodiversity perspective … has nothing to do with fascists”.

The ecologist Dave Foreman was a co-founder of  Earth First! But his increasingly anti-immigration ideology led to his expulsion.

Co-founder of Vice magazine and the Proud Boys Gavin McInnes espoused the ecological virtues of population and immigration control.

The eco-xenophobic rhetoric has proliferated and conflate both arguments about population growth and outright racist beliefs.

The prospect of a future mass movement of climate change refugees will feed into these anti-immigrant sentiments and the worsening climate crisis will easily align with anti-immigration activists looking to use environment protection as an excuse to close borders, as doing something about climate crisis.

We should heed the analysis of Veery Marten, an Earth First! Journal collective member.

“The culprits of this white supremacist violence citing alleged environmental interests are almost always middle class white men who are not lowering their own carbon footprint. It’s not really about consumption, it’s about who’s allowed to consume and gate-keeping these resources...Mainstream environmentalists and the broader left may no longer espouse the benefits of limiting immigration, but many do warn of an impending global refugee crisis worsened by climate change that will in turn pressure societies unable or unwilling to grapple with an influx of new residents...”