His warning came at a separate summit that saw representatives from countries with the highest greenhouse gas emissions lock horns over how best to address the crisis.

“My message to donor countries is very clear,” he told ministers. “Without adequate finance, the task ahead is well-nigh impossible.”

He added that, across the board, nations were still not doing enough to slash their carbon emissions. “On our current course, we are heading for global temperature rises of over 3C,” he said. “That will cause devastation in each and every country that is here today in this conference. And, in many cases, it will be the catalyst for an apocalyptic future. We must do much more now to turn remote targets into immediate action.”

John Kerry, the US special climate envoy, explained, “If you put the US, China and Europe together … we’re well over 50 per cent of all the emissions in the world right there.”

“You have countries whose per capita emissions are four times, five times, six times, 12 times the world average. The question is: when are these emissions going to come down?” he said. India is the world’s third-largest greenhouse gas emitter. However, its “per capita emissions” – country emissions split per person – are far below the global average.

Amanda Khozi Mukwashi, chief executive of Christian Aid, said: “Vulnerable communities on the frontline of a climate emergency they did not cause need financial support. If the UK is to deliver a successful climate summit, then this week’s meeting must restore the much-needed aid, ensure that debts are cancelled and commit the finance needed to help poorer nations adapt to a changing climate.”

Clare Shakya, director of climate change research at the International Institute for Environment and Development (IIED), said Britain's aid reduction would undermine its credibility in encouraging other wealthy nations to step up funding for climate action.

"In the middle of a pandemic, to have health or education services under threat because of one donor suddenly disappearing" can throw overall progress off track, she told the Thomson Reuters Foundation. "It's incredible that (the UK) could think that isn't a problem," she added.

Harjeet Singh, ActionAid's global lead on climate change, said governments could "no longer ignore the soaring costs of the climate crisis in the global south". He cited the example of Mozambique, which had to borrow from the International Monetary Fund to pay for its response to two powerful cyclones in 2019 and is now struggling to help "hungry and desperate" communities rebuild their lives. "Urgent debt cancellation to enable countries to recover from the COVID-19 health and economic crisis and build climate resilience is also vital," he said .

As we have witnessed with the global pandemic, ultimately a lesser than global warming, governments will put the interests of their national economies to the forefront when it comes to solutions. 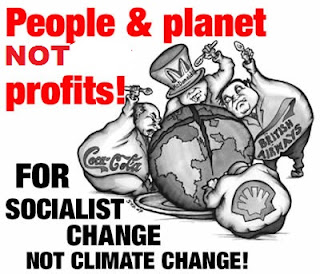