The Pandemic and Billionaires 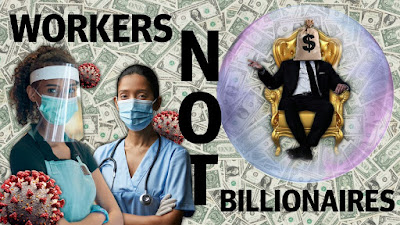 A report published Wednesday by a coalition of advocacy groups  entitled Billionaire Wealth vs. Community Health: Protecting Essential Workers from Pandemic Profiteers,  focuses on 12 of the most egregious pandemic profiteers—the "Delinquent Dozen"—who include the owners of Walmart and the CEOs of Amazon and Target.

These companies and their owners and executives have benefited from their "monopoly positions," the report states, but their success "hasn't translated into better pay or safer working conditions for the employees showing up to work in a pandemic."

It's not just corporations—"private equity firms have bought up essential businesses in the healthcare, grocery, and pet care industries, only to aggressively cut costs, skimp on worker safety, and load companies up with debt to boost their own profits," the report notes.

Among its key findings:

Where millions of Americas saw fear and financial insecurity, a few wealthy CEOs saw a chance to profit — and they capitalized on it, heavily.
"The contrast between billionaires making no sacrifice while their essential workers make the ultimate sacrifice, risking their health, their families, and their livelihoods is both unethical and corrupt," Chuck Collins, a senior scholar at the Institute for Policy Studies and one of the authors of the report.
https://www.commondreams.org/news/2020/11/18/billionaire-bonanza-continues-workers-pounded-pandemic-recession-and-gop-relief
Posted by ajohnstone at 5:21 am