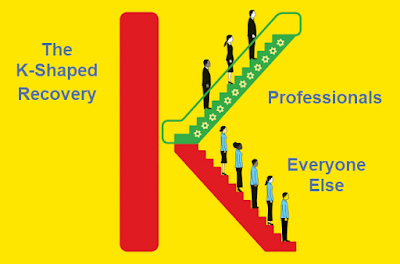 Economists talk of a “K-shaped recovery” where the well-off bounce back on the upward tick of the K while the less fortunate slide further into poverty on the downward leg.

Stock markets are at record highs. And the very rich have done very, very well. America’s billionaires have added $1tn to their wealth over the pandemic.

Yet 20 million Americans are currently unemployed.  About 778,000 people filed for unemployment last week alone. For many hunger has become a major issue. Government figures show that the week before Thanksgiving – America’s biggest feast day – 5.6m households struggled to put enough food on the table. Huge lines have formed at food banks across the country and years of neglect and underfunding of the systems to help those in need have worsened their plight.

According to the Century Foundation, 12 million Americans will be cut off from their jobless benefits on 26 December. Anew round of stimulus have stalled and stalled again. The extra payments have stopped, the cash has been spent. Republicans, happy to run up record debts under Trump, are now talking about the need for “austerity”.

“It’s borderline criminal that nothing has been done,” said William Rodgers, former chief economist at the US Department of Labor, and an informal adviser to the Biden transition team. “They rammed through a supreme court nominee but have done nothing to help American families.”

A disproportionate number of those people will be women and Latino or Black and young, the groups hardest hit by the economic downturn. only one in four US workers have a job that allows them to work from home.

Janet Yellen, the next treasury secretary of the United States, said that the African American unemployment rate in particular was too high but argued that the central bank was ill-suited to address the issue.

She told Reuters: “There really is a new kind of recognition that you’ve got a society where capitalism is beginning to run amok and needs to be readjusted in order to make sure that what we’re doing is sustainable and the benefits of growth are widely shared in ways they haven’t been.”

The US is on ‘inequality autopilot’ – how can Biden's treasury pick help change course? | US income inequality | The Guardian

"capitalism is beginning to run amok and needs to be readjusted" said someone who has a well-paid career in keeping capitalism going. You'd think they'd know better by now but the capitalistic urge is too strong.