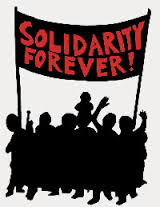 Over 250 million workers participated in the strike, called by 10 central trade unions and hundreds of worker associations and federations.

Kerala, Puducherry, Odisha, Assam and Telangana witnessed a complete shutdown while normal life was partially affected in several other states as workers struck work and took to the streets, protesting against the “anti-worker” and pro-corporate policies and labour laws as well as the new farm laws brought in by the Narendra Modi-led Bharatiya Janata party government.

Posted by ajohnstone at 2:15 am