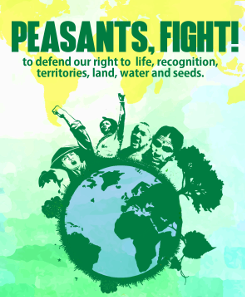 Tens of thousands of Indian farmers continue to protest in and around New Delhi, the national capital against agricultural legislation they say could be exploited by the private sector to buy their crops at low prices. Police had used tear gas, water cannon and baton charges to block the demonstrations from arriving but eventually the farmers were allowed to enter the city.

Farmers and their unions have rejected laws, which were passed in September which they say could cause the government to stop buying grain at guaranteed prices and result in their exploitation by corporations that would buy their crops cheaply.

“We are fighting for our rights. We won’t rest until we reach the capital and force the government to abolish these black laws,” said Majhinder Singh Dhaliwal, a farmer activist.

Farmers have long been seen as the heart and soul of India, where agriculture supports more than half of the country’s 1.3 billion people. But farmers have also seen their economic clout diminish over the last 30 years. Once accounting for a third of India’s gross domestic product, they now produce only 15 percent of the country’s $2.9 trillion economy. Farmers often complain of being ignored and hold frequent protests to demand better crop prices, more loan waivers and irrigation systems to guarantee water supplies during dry spells.

Darshan Pal of the All India Kisan Sangharsh Coordination Committee (AIKSCC) and Punjab president of Krantikari Kisan Union, said “They [government] have actually opened the markets, open the land and open the commodities of the farmers for the big corporate houses. They will form the mandis (agricultural markets), they will get the contract farming done and control the agribusiness. Our basic demand is to scrap all these anti-farm laws and assure the Minimum Support Price (MSP) [the price at which the government buys farm produce] as recommended for all the crops and assured marketing guarantee for all the crops.”

Sukhdev Singh, Punjab general secretary of the Bhartiya Kisan Union Ekta, accused the government of passing the laws “to benefit the big corporates...The government didn’t find it worthy or important taking us onboard before bringing these black laws.”

Many people may agree that the agriculture sector needs reforms but they say the laws passed by the Indian government leaves farmers at the mercy of private investors. These laws loosen the rules around sale, pricing, storage – laws which had protected Indian farmers from the market for decades. This is what the farmers are worried about, even though the government says something of a minimum support price for produce will remain. Farmers say there will be no more guaranteed assurance of this.

Posted by ajohnstone at 8:42 am