A report, released Thursday by Public Citizen, details how most of the top 15 U.S. retail companies have quietly taken away hazard pay from their frontline workers, even as the coronavirus has continued to spread across the country and is now surging in states including Wisconsin, Nebraska, Wyoming, and Minnesota. Companies like Dollar General and Walmart—which have made massive profits over recent months—have treated their employees like "sacrificial workers" by stripping hazard pay even as the pandemic soared. They're not "essential." They're disposable

The 15 biggest retailers in the U.S. reported a combined $14.6 billion increase in profits during the 2020 fiscal year, compared with fiscal year 2019. The nine companies which have halted hazard pay and employee bonuses entirely reported $10.5 billion more in profits this year. Despite soaring profits thanks to employees who kept stores running, hazard pay ended for many workers almost as soon as it began.

"They may say 'we're all in this together,' but too many big retailers are prioritizing maximizing profits over paying their frontline workers," said Rick Claypool, research director at Public Citizen and the author of the report. "While business booms and the pandemic rages, the rich are getting richer—and workers are getting sicker." Claypool goes on to say, "If 'we're all in this together,' as so many have said during the coronavirus pandemic, why are so many businesses holding out on workers?" wrote Claypool. "Why are they prioritizing making executives and shareholders richer over providing a living wage for the workers who risk their health and the health of their loved ones in order to carry out the business' work? In reality, the pandemic is worsening the systemic inequities—especially economic, racial, and gender inequities—that have long plagued this country"

Workers at Dollar General received only one hazard payment, while Kroger ended its bonuses in May after two months. Albertsons, Amazon, and Dollar Tree provided their workers with only three months of hazard pay while Big Lots and Walmart ended their bonuses in July.

According to the Public Citizen report, companies that have cut hazard pay have shifted their booming resources to stock buybacks. Six of the top 15 companies reported a combined $3.7 billion in buybacks in the last quarter, and seven companies said earlier this year they planned to devote a combined $17.8 billion on stock buybacks. In the previous quarter, Albertsons, BJ's Wholesale Club, Dollar General, and Walmart spent nearly $3 billion combined on buybacks. 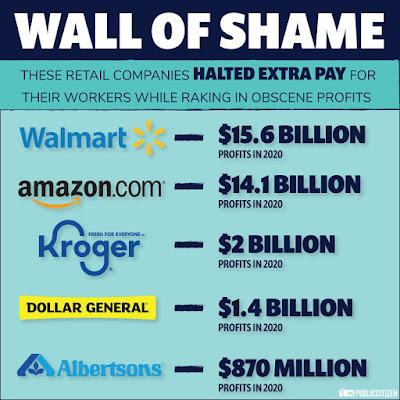