The Destruction of Nature (1909 by Anton Pannekoek) 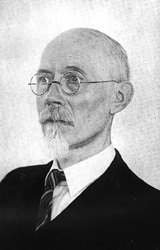 This early article by the renown socialist scholar, as well as respected astronomer, Anton Pannekoek, goes a long way to dispel the idea that socialists have held a very productivist view about mankind's relationship with the environment. It deserves a wide circulation within the ecology movement.

The destruction of nature (Anton Pannekoek, 1909)

There are numerous complaints in the scientific literature about the increasing destruction of forests. But it is not only the joy that every nature-lover feels for forests that should be taken into account. There are also important material interests, indeed the vital interests of humanity. With the disappearance of abundant forests, countries known in Antiquity for their fertility, which were densely populated and famous as granaries for the great cities, have become stony deserts. Rain seldom falls there except as devastating diluvian downpours that carry away the layers of humus which the rain should fertilise. Where the mountain forests have been destroyed, torrents fed by summer rains cause enormous masses of stones and sand to roll down, which clog up Alpine valleys, clearing away forests and devastating villages whose inhabitants are innocent, “due to the fact that personal interest and ignorance have destroyed the forest and headwaters in the high valley.”

The authors strongly insist on personal interest and ignorance in their eloquent description of this miserable situation but they do not look into its causes. They probably think that emphasising the consequences is enough to replace ignorance by a better understanding and to undo the effects. They do not see that this is only a part of the phenomenon, one of numerous similar effects that capitalism, this mode of production which is the highest stage of profit-hunting, has on nature.

Why is France a country poor in forests which has to import every year hundreds of millions of francs worth of wood from abroad and spend much more to repair through reforestation the disastrous consequences of the deforestation of the Alps? Under the Ancien Regime there were many state forests. But the bourgeoisie, who took the helm of the French Revolution, saw in these only an instrument for private enrichment. Speculators cleared 3 million hectares to change wood into gold. They did not think of the future, only of the immediate profit.

For capitalism all natural resources are nothing but gold. The more quickly it exploits them, the more the flow of gold accelerates. The private economy results in each individual trying to make the most profit possible without even thinking for a single moment of the general interest, that of humanity. As a result, every wild animal having a monetary value and every wild plant giving rise to profit is immediately the object of a race to extermination. The elephants of Africa have almost disappeared, victims of systematic hunting for their ivory. It is similar for rubber trees, which are the victim of a predatory economy in which everyone only destroys them without planting new ones. In Siberia, it has been noted that furred animals are becoming rarer due to intensive hunting and that the most valuable species could soon disappear. In Canada, vast virgin forests have been reduced to cinders, not only by settlers who want to cultivate the soil, but also by “prospectors” looking for mineral deposits who transform mountain slopes into bare rock so as to have a better overview of the ground. In New Guinea, a massacre of birds of paradise was organised to satisfy the expensive whim of an American woman billionaire. Fashion craziness, typical of a capitalism wasting surplus value, has already led to the extermination of rare species; sea birds on the east coast of America only owe their survival to the strict intervention of the state. Such examples could be multiplied at will.

But are not plants and animals there to be used by humans for their own purposes? Here, we completely leave aside the question of the preservation of nature as it would be without human intervention. We know that humans are the masters of the Earth and that they completely transform nature to meet their needs. To live, we are completely dependent on the forces of nature and on natural resources; we have to use and consume them. That is not the question here, only the way capitalism makes use of them.

A rational social order will have to use the available natural resources in such a way that what is consumed is replaced at the same time, so that society does not impoverish itself and can become wealthier. A closed economy which consumes part of its seed corn impoverishes itself more and more and must inevitably fail. But that is the way capitalism acts. This is an economy which does not think of the future but lives only in the immediate present. In today’s economic order, nature does not serve humanity, but capital. It is not the clothing, food or cultural needs of humanity that govern production, but capital’s appetite for profit, for gold.

Natural resources are exploited as if reserves were infinite and inexhaustible. The harmful consequences of deforestation for agriculture and the destruction of useful animals and plants expose the finite character of available reserves and the failure of this type of economy. Roosevelt recognises this failure when he wants to call an international conference to review the state of still available natural resources and to take measures to stop them being wasted.

Of course the plan itself is humbug. The state could do much to stop the pitiless extermination of rare species. But the capitalist state is in the end a poor representative of the good of humanity. It must halt in face of the essential interests of capital.

Capitalism is a headless economy which cannot regulate its acts by an understanding of their consequences. But its devastating character does not derive from this fact alone. Over the centuries humans have also exploited nature in a foolish way, without thinking of the future of humanity as a whole. But their power was limited. Nature was so vast and so powerful that with their feeble technical means humans could only exceptionally damage it. Capitalism, by contrast, has replaced local needs with world needs, and created modern techniques for exploiting nature. So it is now a question of enormous masses of matter being subjected to colossal means of destruction and removed by powerful means of transportation. Society under capitalism can be compared to a gigantic unintelligent body; while capitalism develops its power without limit, it is at the same time senselessly devastating more and more the environment from which it lives. Only socialism, which can give this body consciousness and reasoned action, will at the same time replace the devastation of nature by a rational economy.

Original German, and a French translation, can be found here:
http://pantopolis.over-blog.com/2019/07/anton-pannekoek-la-destruction-de-la-nature-1909.html
Posted by ajohnstone at 12:00 am

Would you mind if I posted this to Marxist Internet Archive? And if I can do that, is there somebody that I could credit the translation to?

ALB is the person to ask.

Could you hold off for a bit until the Standard has published it and gets much needed coverage.

It's waited 110 years, a month or two more would hurt much. I'm intending to widely circulate once I have the Standard's link to it.

No probs. The wider it is spread to dispel the idea that socialism has never nor will place the environment as a priority, the better

could we please republish it on our website UndebtedWorld? https://undebtedworld.wixsite.com/undebtedworld/blog?fbclid=IwAR14TZBiotiWx8QBhbzgWqdvf_RKHm5480S8EgbFiHTnVEywpUHvgok_VkU