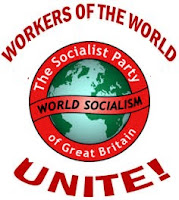 The Socialist Party is determined to bring the liberating ideas of socialism to the people and wipe capitalism off the face of this planet. As a party, we are inheritors of the only tradition that can effectively spur on the battles for fundamental social change. The current political leaders cannot and will not solve the problems with their self-serving vested interests. The Socialist Party is engaged in a struggle that can unite the working class to overthrow capital and end the exploitation of mankind forever. Creating a world, a socialist society, where working people live from birth to death never having to suffer under the chains of wage slavery. Socialism is the only antithesis to capitalist property relationships. the key to socialism, the key to revolutionary internationalism, the thread and connecting link are the impoverished and desperate and angry all over the world. This is a time for revolutionary change. For the first time in history, humankind can produce such abundance that society can be free from hunger, homelessness and back-breaking toil. The only thing standing in the way is this system of exploitation and injustice.

The Socialist Party is the beginning of a revolution for a better world, politically, socially and economically. The Socialist Party takes as its mission the political awakening of working people. We invite all who see that there’s a problem and are ready to do something about it to join with us. With our organised strength, we will liberate the thinking of our fellow-workers and unleash their energy. We will win them to the cause of the cooperative commonwealth.

The Socialist Party will sway the people with a vision of a world of plenty. New technology provides better and more products with less and less labour. Society now has the capacity to devote the energies and talents of its people to satisfying the needs of all. We will inspire working people with the alternative: a society organised for the benefit of all, a society built on cooperation which puts the well-being of its people above the profits and property of a handful of billionaires. When the class which has no place in the capitalist system seizes control of all productive property and transforms it into collective property so it can re-organise society so that the abundance is distributed according to need.

The Socialist Party will empower fellow-workers with the understanding of their role in striving for this new society and imbue them with the confidence that it’s possible to win. More and more, people from every walk of life against this system are looking for an organisation with a plan for what has to be done. We call on you to join us in this cause. The fight is for what people need in order to live. Time is always on the side of the oppressed - and time is an enemy of all systems heading for extinction

Utopian socialists believed that capitalism would fall of its own accord because of the inherent contradictions within the capitalist system. All they had to do, they reasoned, was build the institutions of the new society in the womb of the old and, upon the old society’s inevitable fall, the new, existing condition would be socialism. But it takes a class struggle and a social revolution to establish socialism.