James Connolly described working class women as “the slaves of the slaves.”  Rosa Luxemburg described the wives of the capitalist class as “the parasites of the parasites.”  John Lennon said that "women were the nig**rs of the world."

Capitalism is a society of inequalities, in how both wealth and power are distributed. These inequalities have often affected women more adversely than men, and campaigns for women’s rights have been ongoing for over a century. The Socialist Party argues that sexism and misogyny are expressions of how capitalism is inherently divisive and unequal. So, the solution is to address these problems at their source, by uniting to replace capitalism with a society based on equality and freedom.  The real solution to women’s oppression lies within a framework of a completely different economic system, one not based on property and the pursuit of profit.


Feminist theories of womens’ oppression and inequality have been developed largely within the liberal tradition of political philosophy. Demands have usually been formulated on the basis of moral arguments relating to legal rights and justice, and ignoring the economic conditions that render such claims meaningless within the context of capitalism. ‘Socialist’ feminists, while recognising the importance of class, have become bogged down in reformism; in effect their demand is to be wage slaves equally with men. ‘Radical’ feminists attack patriarchy, not class, as the source of women’s oppression.


While it is undeniable that most women experience certain forms of oppression and discrimination as a result of their gender, to suffer from sexism at all it is usually necessary to be a member of the working class; it is not normally a problem for female members of the capitalist class. The socialist movement, being based on a class analysis of capitalism, provides a motivation for women’s liberation since socialism can only be achieved with the majority support of women and of men 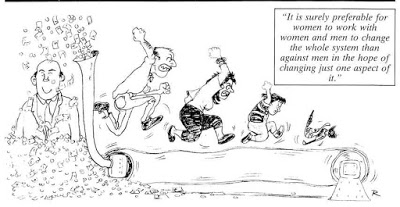