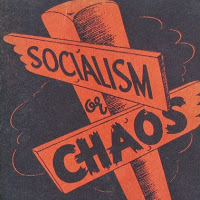 The UK has a new Prime Minister who seems eager to foster Little Englander nationalism. Capitalism does little to unite human beings; at most times it works actively to divide them—as it is working to do now with Brexit.

Young workers who are struggling to buy a home resent immigrants as rivals, especially if they have a different cultural background easily distinguished by the colour of skin. The result of this is that there is a vast reservoir of prejudice and fear. Boris Johnson is pandering to these prejudices. As long as capitalism exists there will be the soulless wastes of housing estates with unhappy discontented workers.

The Socialist Party rejects these assumptions which are promoted by the media and accepted by the majority of the population. We reject the political trickery of capitalism because we see behind the façade of “a new start” the ownership of the means of production by a profit-motivated minority, whose commercial operations engulf the entire world. No solutions to basic problems can result from changing leaders, since they are products of the system, who advocate its continuation and therefore necessarily serve its ends.

To make judgements and form opinions on the basis of personality—the alleged attributes of Johnson against those of Corbyn —is totally futile and irrelevant. To think in terms of “liberal” versus “conservative” is really not to think at all, but to swallow the cut-and-dried concepts of the pundits.

Capitalism sets the limits within which they can move. A socialist society will have no place for leaders or government. The periodic replacement of Prime Ministers and other representatives to governments, whose function is to protect class interest of wealth and privilege and perpetuate our servitude will disappear.

The Socialist Party message to our fellow-workers is that we have another choice. All of us can unite with other workers worldwide to gain political power and wrest control of the Earth’s resources from the capitalist class and convert them from private property used for the production of profit to the common heritage of all humankind.

A brilliant and irrefutable analysis.