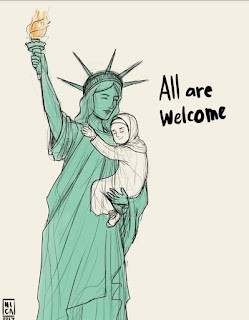 There were predictions that climate change would lead to climate refugees. These are no longer predictions but now reality. The global climate crisis is increasingly being recognised as the factor in Central America's drought and food insecurity while local small farmers are engaged in a battle with multinational corporations for dwindling natural resources. Water shortages and poverty are also linked to the country’s skewed land distribution: roughly 2% of the population control 70% of all productive farmland.

Guatamala, Honduras, El Salvador and Nicaragua receives erratic rain and is particularly susceptible to extreme weather events such as el niño. According Ricardo Rapallo, the head of food security at the FAO, el niño is back and the outlook for 2019 is grim: about 2 million people in the dry corridor will need urgent food aid.

Guatemala has the sixth-highest malnutrition rate in the world with at least 47% of children suffering chronic malnourishment. Malnutrition rates are even higher among the country’s 24 indigenous communities, rising to over 60% in some districts.

“Without doubt climate and environmental changes impact food security. For those who depend on agriculture the situation is very precarious, they are very vulnerable,” said Rapallo.

“Over the past six years, the lack of rainfall has been our biggest problem, causing crops to fail and widespread famine,” said the climate scientist Edwin Castellanos, the dean of the research institute at Guatemala’s Universidad del Valle. “Normal, predictable weather years are getting rarer,” added Castellanos.

In 2018, drought-related crop failures directly affected one in 10 Guatemalans, and caused extreme food shortages for almost 840,000 people, according to the UN’s Food and Agriculture Organization (FAO).

As a result, entire families have been migrating in record numbers: since October 2018, more than 167,000 Guatemalans travelling in family groups have been apprehended at the US border, compared with 23,000 in 2016. Those who remain, often depend on money sent home by emigres, especially in rural areas, which received more than half the $9.2bn of remittances sent to Guatemala in 2018.

Guatemala has lost half its woodlands in the past 40 years – and deforestation rates are rising, in turn causing floods, landslides and erosion of farmland.


Camotán is a collection of rural communities in the eastern department of Chiquimula, which lies in the rain shadow of the imposing Sierra de las Minas. It forms part of Central America’s dry corridor. Around Camotán, water storage is scarce, and the Maya Ch’orti’ people who live here mostly rely on rainfall to irrigate their crops. Most houses have no toilets, and low water reserves mean most families drink and cook with contaminated stream water. The region’s main cash crop is coffee, and for decades, many campesinos relied on seasonal work at commercial plantations to supplement their subsistence lifestyle. But a global price crash and the deadly rust fungus known locally as la rolla – which thrives in hot and humid conditions exacerbated by the climate crisis – have wiped out about 80% of the region’s coffee in the past five years. This has led to less work, lower pay and more hunger. They’re desperate. There’s no money and no food. So Guatemalan families choose between hunger and migration.

“This isn’t poverty – or even extreme poverty: this is a famine, and people are dying,” said Rodimiro Lantán from Comundich, a grassroots Ch’orti’ organisation helping communities reforest ancestral lands in an effort to prevent forced migration. Families have an option: stay and risk starvation, or gamble everything on the migrant trail. “They risk their lives if they stay – and if they go,” said Lantán.