The Nest-eggs of US CEO's

Just 100 CEOs have company retirement funds worth $4.7 billion — a sum equal to the entire retirement savings of the 41 percent of U.S. families with the smallest nest eggs.

This $4.7 billion total is also equal to the entire retirement savings of the bottom:

On average, the top 100 CEO nest eggs are large enough to generate for each of these executives a $253,088 monthly retirement check for the rest of their lives.

Among ordinary workers, those lucky enough to have 401(k) plans had a median balance at the end of 2013 of $18,433, enough for a monthly retirement check of just $101.
Of workers 56-61 years old, 39 percent have no employer-sponsored retirement plan whatsoever and will likely depend entirely on Social Security, which pays an average benefit of $1,239 per month. [...]
With nearly $3 billion in special tax-deferred accounts, Fortune 500 CEOs stand to gain enormously from Trump’s proposed tax cuts on top earners. [...]

The retirement asset gap between CEOs mirrors the racial and gender divides among ordinary Americans. 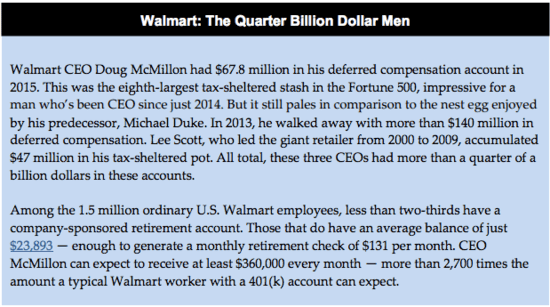