Farming for food or profits? 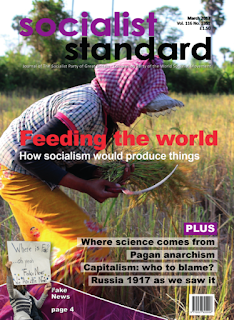 Farming is a business and like all businesses, the goal is to maximise profits. This article, although by no means offering socialism as the answer, addresses some of the problems being faced by the small farmers around the world.


“...In commercial farming, the stakes are high. Each season, farmers gamble on which crop will fetch the highest price or which seed variety will reach the greatest yields. Sometimes the pay-offs are big. But losses resulting from crop failure, a sudden drop in prices or scams by middlemen are just as frequent. Debt weighs heavily on the world’s farmers.

Needless to say, corporations are also trying to secure their profits in this high-stake business. But unlike farmers, global food and agriculture companies have multiple resources at their disposal, which act as a safety net in the face of agriculture’s many inherent risks. One such resource is the World Economic Forum (WEF), which plays a critical role in helping corporations maintain and increase their profit margins.
Several decisions coming out of the WEF’s meeting in Davos in January 2017 confirm this. A press release from theWorld Business Council for Sustainable Development (WBCSD), for instance,announced that a group of 25 global companies had joined together to launch Food Reform for Sustainability and Health (FReSH) under the leadership of the WBCSD and the EAT Foundation (EAT), with an opening for more companies to participate. FReSH would serve as a platform for private sector FreSH follows the same rationale as other WEF projects, which also benefit big-name food companies like Nestlé, PepsiCo and Unilever. In 2009, the World Economic Forum launched the “Grow” programme under its New Vision for Agriculture, led by 31 “partner companies” involved in the food sector, from agriculture to food processing to retail. Ninety per cent of these companies are based in the US and Europe, yet the programme is focused entirely on Latin America, Africa and Asia—the main growth markets for the global food industry.
Under a logic of public-private partnership, the companies participating in Growfoster close ties with governments in order to increase their control over markets and supply chains. Grow claims to promote food security and benefit small farmers. But the programme’s focus on a select few high-value commodities—like potatoes, maize, coffee, tea and palm oil—exposes its real objective: to expand the production of a handful of commodities to profit a handful of corporations. The impact on communities, biodiversity, nutrition and the climate are potentially disastrous...”
“...At a time when agriculture is almost exclusively judged in terms of its capacity to produce commodities, one tends to forget that the main role of farming is feeding people. And small farmers still produce most of the food that people consume around the world. The UN Environment Programme, the International Fund for Agricultural Development, the FAO and the UN Special Rapporteur on the Right to Food all estimate that small farmers produce up to 80 per cent of the food in the non-industrialised countries. What will be the consequence of transforming producers of diverse foods for local markets into suppliers of a few commodities for global value chains? ….But there is no future for small farmers or small-scale food traders and processors in this vision—except where they can be made subservient to the main goal of large food corporations: securing supplies of cheap produce and raw material for processed food while selling more and more industrial farming inputs. Biodiversity and food security are sure to suffer. And so are farmer livelihoods as they become increasingly indebted and dependent on the world’s largest corporations. ...”