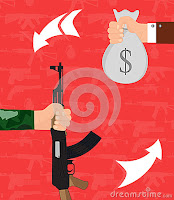 Trump has proposed a federal budget that increases defense spending by $54 billion and slashes "lower-priority" programs. The Office of Management and Budget did not identify which agencies would be slated for cutbacks, but administration officials said almost all other discretionary programs, as well as foreign aid, would see spending reductions.  Many fear that this means that departments that have long been the target of conservative, like the Environmental Protection Agency (EPA), would face the biggest cuts.
Friends of the Earth senior political strategist Ben Schreiber said, " Senate Democrats must come out immediately and make it clear that sacrificing working Americans to Trump's war machine is an unacceptable trade."
Michael Brune, executive director of the Sierra Club, said, "A budget is a statement of priorities, and with this proposal, Trump is telling America he doesn't care about what happens to children who are forced to drink toxic water and breath polluted air.... This is a budget rigged to boost the profits of corporate polluters at the expense of the health of our families."


Trump said the budget will put "America first” but the US are already first in armament spending and the arms trade yet most definitely not first when it comes to education and health.
Posted by ajohnstone at 8:00 pm