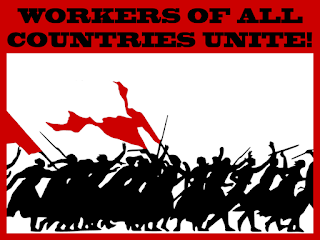 Following on from this earlier blog-post, another article tries to dispel the misconception that the cause of the woes of some workers is competition from fellow foreign workers. The article explains that nationalist rhetoric aims to pit American workers against Chinese workers, all while letting employers off the hook. In fact, workers around the globe experience similar conditions, and are often exploited by the very same capitalists.

Chinese workers  -- much like in the US and elsewhere-- are still barely getting by. Inequality in China has skyrocketed, and in 30 years, the country has gone from being one of the most equal in the world to one of the most unequal. The Chinese government has recently called for revising labor laws to make them more employer-friendly, and has advocated freezes in a minimum wage that was never enough to begin with. Access to high-quality health care, housing and schooling is woefully inadequate, and wage hikes have not kept up with increases in the cost of living. Chinese workers worry that their children will be shut out of an education system run by, and for, the elites.

All this sounds familiar to workers struggling to get by in the US but the similarities continue. Chinese workers are now facing the waves of factory closures and relocations that have plagued the US for decades. In recent years, Chinese labor has become comparatively expensive, in part due to the fact that workers have justifiably been engaged in widespread collective action. Capitalists in labor-intensive industries like electronics, textiles, shoes and toys have increasingly sought even cheaper land and labor in places like Vietnam, Cambodia and Bangladesh. Particularly in the industrial heartland of Guangdong Province, there are increasing signs of premature deindustrialization.

As the Chinese working class struggle to secure a decent livelihood, transnational corporations have cut out the ground from underneath. One result of this is that the number of manufacturing jobs in China has likely already peaked. This makes it clear that Chinese workers have not stolen "our jobs" -- capitalists have continually stolen jobs from whoever has the audacity to demand collective voice at work and a livable wage.

It is transnational capital that has exploited and discarded workers indiscriminately, regardless of national origin. Immensely profitable US companies, such as Walmart and Apple, are inconceivable in their current form without access to cheap, highly productive and politically repressed Chinese labor. And now Chinese capitalists are setting up shop in the US, hoping to enjoy the same low-wage, union-free environment they are used to in their home country.

Trump and Chinese President Xi Jinping share much in common: Both advocate their own race reclaiming its supposed rightful position in the world, and that workers must unquestioningly submit to the authority of their bosses in order to realize that goal. Xi's key platform has been realizing the "great revival of the Chinese race," a phrase that bears more than passing resemblance to Trump's rhetorical "Make America Great Again." Neither can see beyond narrow national capitalist interest -- it is up to us, the workers of the world, to unite and to transcend such nationalist myopia.
Posted by ajohnstone at 12:41 am