Capitalism has created a new type of citizen, one that is able to change nationality by opening a wallet. Think of migration and more likely than not the picture that forms in your mind will be one of huddled, dispossessed refugee masses cast adrift in rudimentary boats.

Yet a parallel and very different form of people movement is undergoing renaissance. it, too, is a product of globalisation, but one which allows the already possessed to buy a second or third nationality quickly and easily, providing them a comfortable bolthole in a fractious world and affording them the ability to flit easily around the planet in pursuit of business and financial opportunities.

The schemes allowing such movement are referred to by the International Monetary Fund (IMF) as Economic Citizenship Programmes (ECPs), though similar arrangements are sometimes called Citizenship by Investment or Immigrant Investment programmes. And new programmes continue to be introduced. In 2013 and 2014, Malta launched a new citizenship programme, while Grenada revived one.

For the super-rich, the world is indeed their oyster. 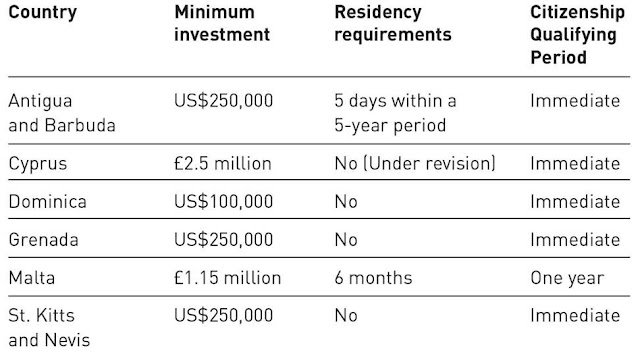