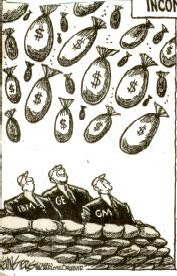 The global sales of major weapons systems rose over the past five years to the highest volume since the end of the Cold War as the Middle East nearly doubled its imports.

Saudi Arabia, which leads a military intervention in Yemen that has cost hundreds of civilian lives, was the world’s second largest importer after India, increasing its intake by 212%, mainly from the US and the UK.  India dwarfed regional rivals, China and Pakistan, by accounting for 13% of the global imports. Vietnam, in particular, dramatically increased imports by 202%, which puts it in the list of 10 largest importers compared to its hitherto position in the 29th place.  Algeria was the largest importer in Africa.


US and Russia together supplied more than half of all exports. The USA supplies major arms to at least 100 countries around the world — significantly more than any other supplier state China, France and Germany were also among the top five exporters.
Posted by ajohnstone at 3:46 am