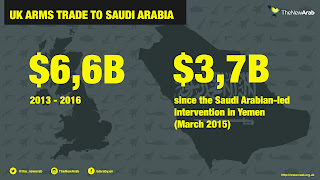 The UK’s defence industry  makes about 20% of arms exported globally. Many of the UK’s biggest customers have questionable human rights records and there are concerns exported weapons are used for repression or against non-military targets. Since 2011 the UK has sold weapons to many countries, including £40m of arms to Thailand, £490m to South Korea, £151m to Malaysia and £299m to Indonesia. But it is clear where it sees its future.

Analysis of HM Revenue and Customs figures by Greenpeace EnergyDesk shows that in 2015 83% of UK arms exports – almost £900m – went to Saudi Arabia. Over the same period, the UK imported £900m of oil from the kingdom. Thousands have died in the Yemen campaign, with the Saudis accused of targeting civilians. Four-fifths of the population is in need of aid, and famine is gripping the country. But despite this, and protests from human rights groups and the United Nations, the UK has continued to arm the Saudi regime, licensing about £3.3bn of weapons to the kingdom since the bombing of Yemen began in March 2015.

What became known as the Arab spring, far from leading to a flourishing of democracy across authoritarian countries in the Middle East and north Africa, caused many to descend into chaos. In the immediate aftermath of the uprisings, the UK parliament’s committee on arms export controls concluded that “both the present government and its predecessor misjudged the risk that arms approved for export to certain authoritarian countries in north Africa and the Middle East might be used for internal repression”.

“The 2011 uprisings should have caused countries like the UK to re-evaluate how they do business with the Middle East and north Africa, but they did no such thing,” said Andrew Smith of  the Campaign Against Arms Trade (CAAT). "The arms sales have increased, even where the repression is getting worse.”

It was a money-spinner for UK arms manufacturers. In the years leading up to the Arab spring, the UK sold those countries £41.3m of small arms, £7m of ammunition and £34.3m of armoured vehicles. In the five years following the events of 2011, these figures, compiled by CAAT, had risen sharply to an annual average of £58.9m, £14m and £59.6m respectively. In some cases sales skyrocketed. UK exports of small arms, ammunition and armoured vehicles to the United Arab Emirates jumped from £18.3m to £93.2m, to Qatar from £2.3m to £33.4m, and to Egypt from £2.5m to £34.7m. Last month Theresa May heralded a £100m deal involving the UK defence giant BAE and the Turkish military, and many defence experts see this as a sign of things to come.

The Arms Trade Treaty sets common international standards for arms export controls, and puts international law and human rights at the heart of the global arms trade.  The Foreign Office minister Tobias Ellwood, noting Britain had led efforts to secure the agreement explained , “The ATT has the real potential to reduce human suffering, and increase security across the globe.”

The government came within hours of suspending arms sales to Saudi Arabia over concerns that there was a risk they breached international humanitarian law. A memo written by an MoD civil servant, revealed that the then business secretary, Sajid Javid, wanted the exports stopped. Dated 12 February 2016, it noted he “has indicated that he will suspend exports if he does not have cross-government agreement [by the end of the day]”. The day before, Edward Bell, head of the government’s export control unit, sent an email saying his gut instinct was to suspend, “given acknowledged gaps in knowledge about Saudi operations”. Javid dropped his opposition to the exports continuing, having secured the backing of both the foreign secretary and the defence secretary for his decision.