The Fight is for Socialism 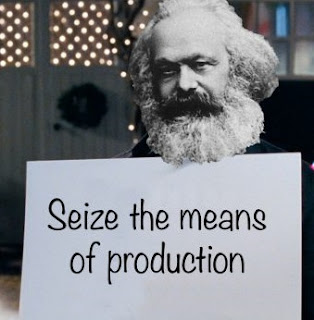 What is socialism? If we are socialists, what are we actually fighting for? This question, long a subject of debate on the left, is receiving even more attention today. It is also a perplexing one for  socialists. Some who call themselves socialists say socialism is simply public ownership of the means of production, or a government welfare system and other criteria are irrelevant. Socialism can seem quite complicated and daunting to alot of newcomers, as its an idea that is very different from our current system. We need a more profound understanding. While it would be impossible to describe exactly what this new social system will look like we can offer general features of it.

The fundamental position of the Socialist Party is our rejection of wages, market, and money system. We claim to constitute the only real alternative to capitalism's exchange economy and seek to create a livable world and we argue againt the very notion that capitalism can be significantly reformed in the pernanent interests of working people. To avoid social, environmental and economic collapse, the world needs to move beyond capitalism.

Our current task is the patient winning of ones and twos to the idea of socialism, perhaps of small groups, but certainly not the creation of a mass party, which is not possible at the present time. To attempt to shout louder than one’s voice merely results in a sore throat and the loss of voice altogether. First, we have to establish ourselves as a presence within the labour movement. Ours is not a strategy of opportunism or adventurism which results in defeats, despair and cynicism, leading to the feeling that the real world will never change, but one of education, agitation and organisation. We endeavour to fertilise fellow-workers with the ideas of Marxism. The most vital requirement is a proper sense of proportion. Our present strength and resources are extremely small. That has been the curse of the epoch, made little better byt he defeats experienced by the working class movement which  have led to a low level of struggle. The dominant ideas continue to be the ideas of the ruling class which all the time hammers it into our heads the idea that socialism is impossible to achieve. One way to combat this is education in Marxist ideas. People who are new to the idea of socialism need to understand the rudiments of the Marxist analysis of how society has developed and can be changed, to learn the lessons of past working class struggles, how we can understand the modern world, and the basics of the analysis of the capitalist economy. Existing socialists  need continually to deepen their understanding of these matters, so that they can cope with all the arguments thrown against them.

There are many who promote all manner of regulated capitalism to tame it and advocate such things as 'fair trade" and "green capitalism" and these have been quite successful in deluding people into devoting their energies and resources to hopeless struggles for minor palliatives. But there is no such thing as "fair trade", when the workers who produce the commodities that are "traded" are exploited in every country by virtue of their condition of wage slavery; unfairness is ineradicable under capitalism. Without a critique of the inherent unfaimess at the very root of capitalism, reformist leaders of the "anti-globalization movement' appear to be primarily concerned with getting the capitalists and ruling elites of undeveloped nations a better deal from their bosses in the industrialised countries.

A "fair wage" or a "living wage" or even a universal basic income won't eliminate exploitation. "Debt relief" won't solve the problem of Third World poverty; "generic drugs" won't end the crisis in health-care in the developing world; "political campaign contributions reform" won't put a halt to corporations controlling governments; nor will reform of corporation taxation bring more equality. All of these reforms together fantasised by their most passionate advocates, would hardly slow the destruction of the world by capitalism. And how would these reforms be implemented and enforced? Through the further increase in the controlling powers of the State. The "anti-globalisation" movement are, whether they admit it or recognise it or not, statists. The solutions they propose and the reforms they seek all presuppose an increase in the interventions of states into social life.

The socialist  revolution, then, is the necessity of the times, and it is essential to get prepared now. The prospects for the future of the workers' movement appears bright. This year could bring about a revitalised struggle on the part of people around the world.