The Problems of African-Americans 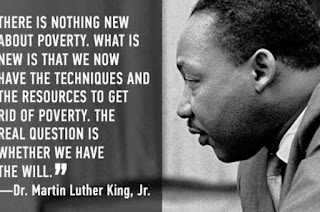 While African-Americans make up only 13 percent of the U.S. population, they represent 22 percent of those experiencing poverty and hunger.

Almost 50 percent of all black children younger than 6 live in poverty—more than three times the proportion of young white children.

Unemployment and low wages, lack of access to healthy and affordable food, poor schools, and higher incarceration rates are just a few of the factors that contribute to this problem. 10.4 percent of African-Americans are unemployed, not counting part-time workers seeking full-time work or those returning from incarceration.

African-Americans are more likely to have poor credit histories than whites with similar incomes. Poor credit can prevent people from securing a job, place to live, or reliable car since many low-wage employers, housing units, and companies consider credit scores when hiring and accepting applicants. African-Americans have lower incomes and higher debt levels. In addition, predatory lenders that charge higher interest rates concentrate in low-income communities, which increases the probability of falling into debt. African-Americans spend more than half their incomes repaying debts. Due to higher interest rates on loans, African-Americans were 80 percent more likely to lose their homes during the Great Recession.
About 40 percent of African-American students (3.2 million children) attend high-poverty schools—six times the rate of whites. African-American college students have the highest level of student debt ($29,344 on average) of any racial group.