Who were the Communards? 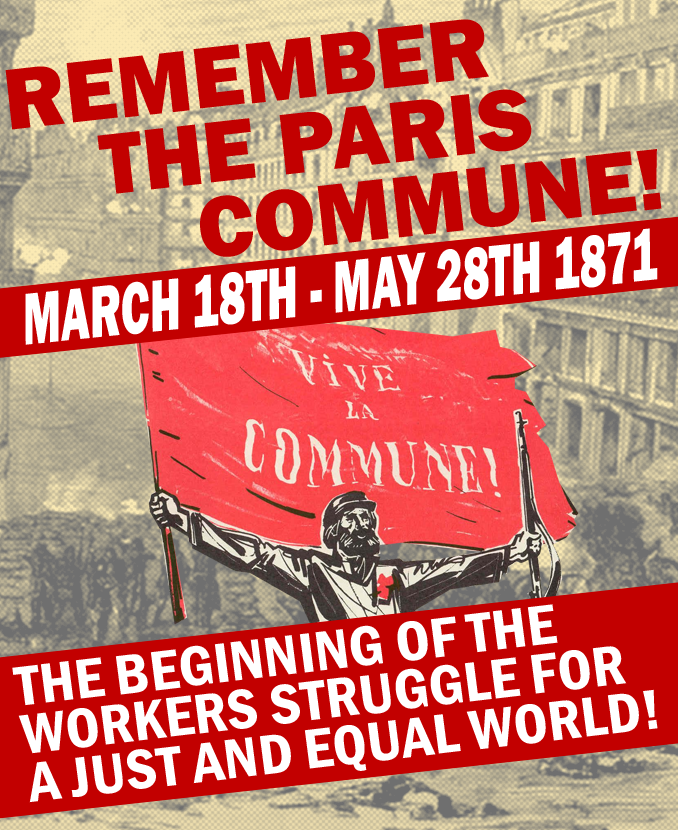 The Paris Commune was a time of big dreams.

In all, sixty-four hostages held by the Commune perished, some executed, others killed in the streets. Estimates of supporters of the Commune who were killed in fighting, summarily executed, or gunned down afterward ranged as high as 25,000 or more. The Versaillais forces set the number at 17,000. An exact "body count" is not possible, as bodies were covered with lime, tossed into the river, or were in burning buildings. The best estimate would be somewhere between 12,000 and 15,000. That’s lots of people, considerably more than the sixty-four hostages who perished at the hands of the Communards.

Hippolyte Taine, a conservative historian, was sure that the Commune was a proletarian revolution. On April 5 he wrote that most fundamentally the "present insurrection" was socialist: "The boss and the bourgeois exploit us, therefore we must suppress them. Superiority and special status do not exist. Me, a worker, I have abilities, and if I want, I can become the head of a business, a magistrate, a general. By good fortune, we have rifles, let's use them to establish a republic in which workers like us become cabinet ministers and presidents."
CLICK READ MORE FOR FULL ARTICLE


The re-organization of work remained a significant goal for Communard militants. The "Declaration of the French people" of April 19 called for the creation of institutions that would provide ordinary people with credit, facilitating "access to property" and "freedom of labor." Ideas and even concrete projects for the "organization of work" were in the air, amid confidence that the defense of the National Guard cannons on March 18 had inaugurated a new era, full of possibilities that would make Paris and the world a better place.

The idea that revolution could bring about reforms that would reduce or even eliminate the considerable differences in conditions of life, opportunities, and expectations remained entrenched in the collective memory of Parisian workers.

As Eugène Varlin stated, "We want to overthrow exploitation of workers by the right to work [le droit au travail] and the association of workers in corporation." Workers hoped that newly established cooperatives would reflect the organization of the Commune itself: decentralized and locally governed. The anarchist Proudhon's influence was apparent in many workers' organizations in many trades. The Proudhonists and Blanquists imagined that France, like Paris, would evolve into a federation of communes, becoming a free country just as Paris had for the moment become a free city (ville libre). Such echoes could be heard at the meeting of women in Trinity Church on May 12, when a speaker thundered, "The day of justice approaches with giant strides. . . . The workshops in which you are packed will belong to you; the tools that are put into your hands will be yours; the gain resulting from your efforts, from your troubles, and from the loss of your health will be shared among you. Proletarians, you will be reborn."

The regulations established by a workshop set up in the Louvre to repair and convert weapons reflected how some workers envisioned manufacturing operating in the future. Foremen and charge-hands (who supervised lathes) were to be elected, just as the National Guard units elected officers. The regulations also laid out the responsibilities of the administrative council, to consist of the manager, the foreman, a charge-hand, and one worker "elected from each workbench," which would set salaries and wages and ensure that the workday did not exceed ten hours. The Commune ordered a survey of workshops abandoned by employers who had fled Paris so that workers' cooperatives could ultimately take them over, which indeed happened in a few in- stances. A small cooperative iron foundry started up in Grenelle. Members moved into one workshop after four days and another after two weeks. The cooperative, employing about 250 workers, produced shells crucial to the city's defense against Thiers. Workers elected "managing directors"—not a very socialist term—led by thirty-nine-year-old Pierre Marc, who had inherited a foundry from his father. The cooperative paid rent to the previous owner of the shop, and its workers earned less than their counterparts employed by the Commune's Louvre shell factory. Producers' cooperatives were thus organized along traditional class lines, and workers were expected to show up with their livret, (a record book of employment), which they had been required to have with them since 1803, despite wide resentment of this obligation.

The Commune also endeavored to improve working conditions. The abolition of night baking by a decree issued on April 20 was one such concrete social measure in the interest of labor taken by the Commune. The debate centered on advantages for bakers and the fact that workers' virtual nighttime enslavement benefited "the aristocracy of the belly." Some master bakers resisted, fearing the loss of clients, and the application of the measure was postponed until May 3, with another decree the next day threatening to seize bread produced before 5 a.m. and distribute it to the poor. Many Parisians still demanded warm croissants first thing in the morning, however, making it difficult for the Commune to enforce the measure. Other Communard decrees established a maximum salary for municipal employees (6,000 francs a year), prohibited employers from taking assessed fines from workers' wages (an increasingly common practice during the Second Empire), and established labor exchanges in each arrondissement.

Given the circumstances and ideological divisions among Communard leaders, it is not surprising that no full-fledged attempt to transform the economy took place, despite the role of socialists who ultimately wanted workers to control the tools of their trades. Yet most Communards accepted the idea of private property. Moreover, for Blanquists, a complete social revolution would have to wait until political power was secured.

Even though the structure of the economy remained relatively unchanged, the status of women improved by leaps and bounds. Indeed, the solidarity and militancy of Parisian women, who had suffered such hardship during the Prussian siege, jumps out as one of the most remarkable aspects of the Paris Commune. Women, taking pride in their role as citoyennes, pressured the Commune to attend to their rights and demands and pushed for an energetic defense of the capital. Citoyenne Destrée proclaimed in a club, "The social revolution will not be operative until women are equal to men. Until then, you have only the appearance of revolution." Élisabeth Dmitrieff, who had helped organize cooperatives in Geneva and then arrived in Paris in late March as a representative of the International, called for the elimination of all competition and for equal salaries for male and female workers, as well as a reduction in work hours. She also demanded the creation of workshops for unemployed women and asked that funds go to aid nascent working-class associations. She stated, "The work of women was the most exploited of all in the social order of the past. . . . Its immediate reorganization is urgent."

British journalist Frederic Harrison assessed the Communards in Paris, writing, "The 'insurgents' ... are simply the people of Paris, mainly and at first working men, but now largely recruited from the trading and professional classes. The 'Commune' has been organized with extraordinary skill, the public services are efficiently carried on, and order has been for the most part preserved." In his view, the Commune, while being "one of the least cruel, has been perhaps the ablest revolutionary government of modern times." Most Communards hailed from the world of Parisian work and included artisans and craftsmen who produced articles de Paris and jewelry. Their numbers included skilled and semiskilled workers—many working with wood, or in shoemaking, printing, or the small-scale production of metals—as well as construction workers, day laborers, and domestic servants. Shopkeepers, clerks, and men in the liberal professions were also well represented. They were among "the people" who had suffered during the siege and felt threatened by monarchist machinations. Of female Communards, 70 percent came from the world of women's work, particularly textiles and the clothing trades. Louise Michel saw no problem with incorporating prostitutes into the corps of women nursing injured fighters: "Who has more right than these women, the most pitiful of the old order's victims, to give their lives for the new?"

The more working class neighborhoods of Paris led the way in support of the Commune. The social geography of Paris reflected a divide between the more prosperous western half of the city and the People's Paris of the eastern districts, as well as between the center and the proletarian periphery. Baron Georges Haussmann's massive urban projects during the Second Empire had only intensified the divide, but with the uprising on March 18, the periphery had arguably conquered the beaux quartiers. This is not to say that there were none who opposed the Commune in poorer arrondissements like the Eleventh, Twelfth, Eighteenth, Nineteenth, and Twentieth or that there were no devoted Communards in the relatively more privileged Sixth, Seventh, and Eighth Arrondissements. The Second Arrondissement embodied the social and political divide that existed even within relatively prosperous districts. The western parts of the arrondissement were more bourgeois, more anti-Communard, and highly suspicious of proletarian Belleville and its national guardsmen and the Vengeurs de Flourens, a military unit named in honor of the martyred Communard, who came down to parade in the conservative quartiers below. In the early weeks of the Commune, many residents advocated conciliation and a negotiated settlement and voted for moderate representatives in the election of March 26. The more plebeian eastern neighborhoods of the Second Arrondissement sent delegates to the Commune; the middle-class residents to the west did not. Around 12,000 people required living assistance in the arrondissement and were more likely to be guardsmen whose families' depended on the 1.50 franc daily payment. A mechanic put it this way: "I have seven children, and my wife was ill. I had no other means of feeding my family."

Excerpts from Massacre: The Life and Death of the ParisCommune, by John Merriman. 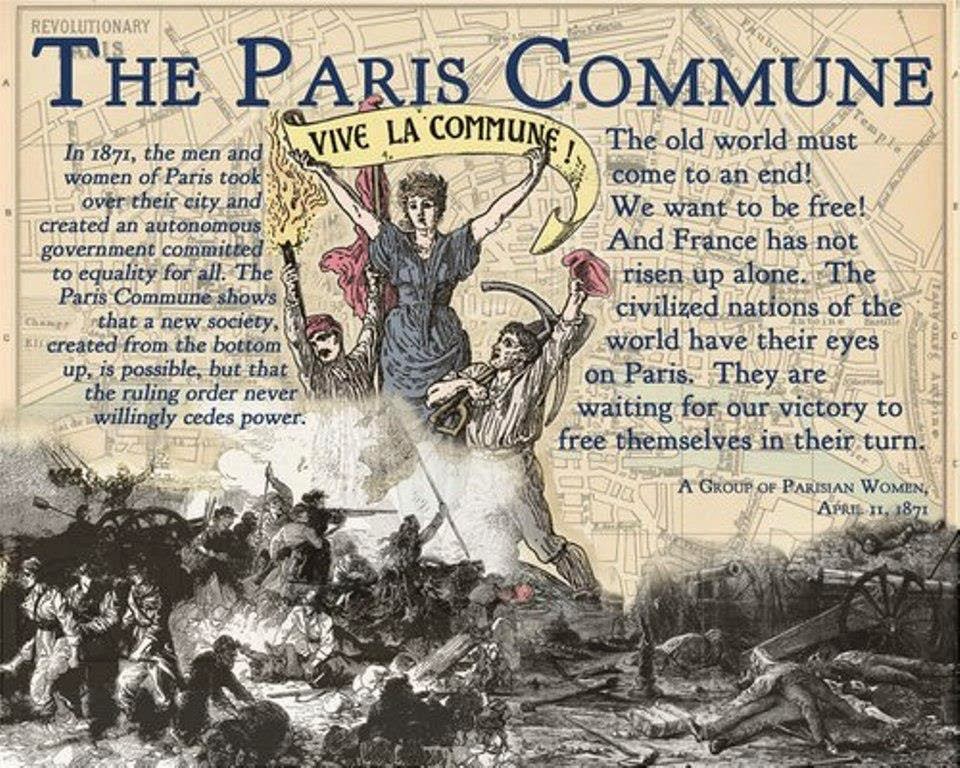 Posted by ajohnstone at 7:14 am