We are the World Socialist Movement 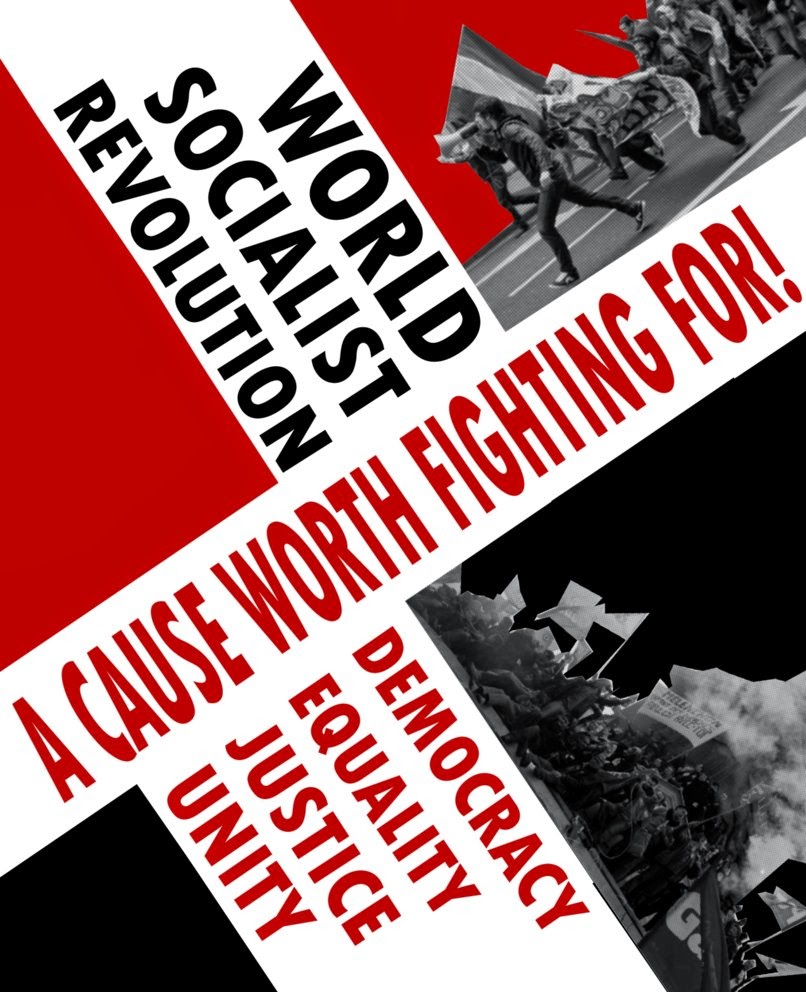 Prime Minister Tony Abbott indignantly asserts "I really think Australians are sick of being lectured to by the United Nations particularly given that we have stopped the boats and by stopping the boats, we have ended the deaths at sea." The number of boat arrivals has fallen what Abbott doesn’t say is that the boat arrivals simply go elsewhere. So rather than stopping deaths at sea it is simply placing deaths elsewhere. Operation “Sovereign Borders” has no accountability in terms of what happens in terms of sea matters. We don’t actually know where some of these things go, the reporting is sketchy and poor. And then there is a broader issue, that if you stop refugees coming by one channel, they will always go through another channel and that is just a reality of the global refugee problem.

Conflicts in the Middle East and elsewhere have pushed the number of refugees to 13 million last year, the international community is struggling to shoulder the humanitarian responsibility of protecting those fleeing violence and persecution in their homelands. Australia – a wealthy nation, far from major war zones, whose 23 million people enjoy a per-capita GDP of 67,458 dollars – the government has implemented ruthless policies for the roughly one percent of global asylum seekers who hope to find refuge on its shores. Last year Australia received 4,589 asylum applications compared to 29,009 in France and 51,289 in the United States. Over 37 years Australia received a total of 69,445 asylum seekers, only slightly higher than the 67,400 Germany received during the first six months of last year.

In a country boasting of prosperity and peace, asylum seekers are demonised for seeking safety and freedom. Australia is the only nation to indefinitely incarcerate asylum seekers in immigration detention centres on arrival. Those who arrive by sea are transferred to offshore detention centres in the developing Pacific Island states of Nauru and Papua New Guinea. They are refused resettlement in Australia, even if assessed as refugees. More than a year ago the government began turning asylum-seeker boats back at sea. Refugee assessments were suspended more than two years ago to remove advantage to those arriving by irregular means. By mid-2014, approximately 3,624 asylum seekers, including 699 children, were in detention centres. Long confinement on average for 413 days in harsh living conditions were key factors in 34 percent of children and 30 percent of adults being diagnosed with serious mental disorders. There were 1,149 recorded incidents of serious assault, including sexual abuse, in detention centres, and 128 of children self-harming, the AHRC found. The government’s recent announcement that children below 10 years will be released into community detention with bridging visas won’t apply to those who arrived before Jul. 19, 2013.

In a report submitted to the U.N. Human Rights Council Monday, Juan Mendez, the U.N.’s special rapporteur on torture, concluded that Australia’s “Migration and Maritime Powers Legislation Amendment, which has passed both the house and the Senate of Australia at this point, violates the [Convention Against Torture, or CAT] because it allows for the arbitrary detention and refugee determination at sea, without access to lawyers.” Mendez’s report also found that the indefinite detention of asylum seekers on Papua New Guinea’s Manus Island, together with reports of ill-treatment and outbreaks of violence, constituted a violation of the human right “to be free from torture or cruel, inhuman or degrading treatment, as provided by articles 1 and 16 of the [Convention Against Torture].” In a statement published on Mar. 9, Daniel Web, director of legal advocacy at the Melbourne-based Human Rights Law Center, said, “Under international law, Australia can’t lock people up incommunicado on a boat somewhere in the middle of the ocean. Nor can we return people to a place where they face the risk of being tortured. Yet these are precisely the powers the Government has sought to give itself through recent amendments to its maritime law.” Australia’s mandatory and prolonged immigration detention policies are also “in clear violation of international human rights law”, including the Convention on the Rights of the Child, the Australian Human Rights Commission (AHRC) recently reported.

A 2010 public survey revealed more than 60 percent of respondents accepted the government’s hard-line stance. “Australia has fought its ideological war with as much moral insanity as would be found in a dictatorship,” the Australian writer, Isobel Blackthorn, wrote last year. “We are being systematically conditioned into accepting the cruel treatment of others as necessary and inevitable.” According to Blackthorn, “Many in Australian society adopt without question the views and falsehoods promulgated by politicians and the media that set out to inflate our sense of entitlement in ‘the lucky country’.” Blackthorn suggests that the “asylum seeker issue feeds a nationalism that comes dangerously close to the far right”, adding that if the public doesn’t collectively use its democratic right to demand change of their government it is possible that “Australia will fall foul of the sorts of extremisms that have led to so many fleeing their homelands.”

Professor Nick Haslam, head of Melbourne University’s School of Psychological Sciences, told IPS, “Activists have been quick to criticise successive governments while letting the general public off the hook.”

Official references to asylum seekers as “illegals”, suggesting criminality – despite the United Nations High Commissioner for Refugees (UNHCR) stating clearly that “seeking asylum is not illegal and respecting the right to seek asylum includes provision of humane reception” – have not been sufficiently challenged. In reality, more than 88 percent of asylum seekers between 2008 and 2013 were found to be legitimate refugees. There has been little public resistance to the electoral point-scoring of politicians who ignore the ‘push’ factors, such as global conflict, and regale the ‘pull’ factors, that the good life in Australia is attracting an invasion. This theory ignores the fact that the vast majority of asylum seekers head to Europe and the United States.

The above, of course, does not offer the UK or the EU any moral high ground. The Syrian civil war has been a massive, almost unimaginable humanitarian disaster. The conflict has generated a huge number of internally displaced people and refugees: 3.5 million people have now fled to other countries. In the massive refugee camps in the region people barely survive in dire living conditions. Political asylum in European states offers stability and a chance for children to be safe, educated, clothed and fed. When the choice is between, on the one hand, immense suffering and on the other, security in Europe, many will risk their lives and the lives of family loved ones to cross the Mediterranean for a safe haven. The UK’s, the world's 6th richest economy, record on Syrian asylum claims is also abysmal. It was only after huge cross-party and civil society pressure that the UK government was embarrassed into announcing in January 2014 that it would run its own resettlement programme. A year on, the latest official statistics reveal that a mere 143 Syrians have been resettled in the UK under the programme. Between 2011 and 2014 Germany granted asylum to 43,000 Syrians on top of their resettlement scheme (30,000 places offered by Germany); ten times as many as the 4,292 here in the UK. There are many Syrians with family or other links to the UK. The latest official migration statistics show that the refusal rate for Syrians applying for visas has doubled, from below 30% before the conflict to 60% as of December 2014.  The UK has even pursued removal action against Syrians: 50 were removed to other EU states between January 2013 and December 2014, some of them very vulnerable individuals. Compare this with 1.1 million Syrian refugees in Lebanon, a small country where the refugees now make up around 26% of the total population. Turkey has 1.6 million. Jordan has over half a million.

The UK was partly instrumental in the dismantling of Mare Nostrum, the Mediterranean search and rescue mission. The hostility of the UK to Syrian refugees means letting them drown at sea. It's ironic that the UK foreign policy was fully behind the “humanitarian” carpet bombing of Libya and the destruction of Iraq. The arming and training of terrorist thugs to undertake regime change in Syria, driving millions out to become what else? You guessed it...refugees who in most cases lost everything except their lives and somehow Cameron and his ilk blame the victims. Australia was fully complicit in the Iraq and Afghanistan wars which have resulted in many of the innocent victims seeking refuge there and the Australian government prefers a policy of abandoning responsibility for the consequences of their policies.

Shame on both nations. Shame on all those who deny compassion for the vulnerable and decline solidarity to the suffering.

For World Socialism. One Planet. One People.

In Southeast Asia, the UNHCR report estimated that last year 54,000 people undertook terrible risks on smugglers' boats, the majority of whom left from the Bay of Bengal fleeing towards Thailand and Malaysia. Hundreds of others were moving further south in the Indian Ocean. This figure for 2014 represents a 15% increase over the same period in 2013, and more than triple the estimated number of departures during the same period in 2012.

The majority of these are ethnic Rohingya fleeing ongoing violence in Burma’s Rakhine state. UNHCR estimated that last year 540 people died during these journeys, due to starvation, dehydration and beatings by crew members. UNHCR reports that those who do make it to Thailand, Malaysia or Indonesia face detention, exploitation and violence.

Detainees in several of the UK’s immigration detention centers, including Harmondsworth – the country’s largest detention facility – have staged hunger strikes and demonstrations, calling for improved conditions and a limit to the maximum detention time.

Several hundred asylum seekers at Harmondsworth detention center, near London’s Heathrow Airport, have been on hunger strike since Monday. A reported 300 migrants are participating in the strike at the detention facility, which houses around 620 men. Hunger strikes and protests have been breaking out in similar centers since last week. In an open letter to the Home Office, detainees submitted a list of grievances. They complain of inadequate healthcare and access to legal service, noting that sometimes no legal counsel is provided for them at all.
http://rt.com/uk/240205-detention-center-hunger-strike/