For several years now, transnational food companies have understood that their main growth markets are in the South. To increase their profits they need to “dig into the pyramid”, as one company puts it, meaning they need to develop and sell products targeted at the millions of the world's poor. These people generally eat food from their own farms or informal markets selling locally-produced foods, and in which many of them earn their livelihood.

To get at these potential consumers, food companies are infiltrating, inundating and taking over traditional food distribution channels and replacing local foods with cheap, processed junk foods, often with the direct support of governments. Free trade and investment agreements have been critical to their success. The case of Mexico provides a stark and horrific picture of the consequences for people.

In Mexico, poverty, hunger, obesity and disease go hand in hand. Mexicans are not only struggling to afford enough to eat; the food they eat is making them ill.
In 2012, Mexico's National Institute for Public Health released the results of a national survey of food security and nutrition. The study assessed Mexicans' food security against what is known as the Latin American and Caribbean Food Security Scale (ELCSA). The results made it clear that these problems were far worse than had been acknowledged, as seen in the graphs and table below. 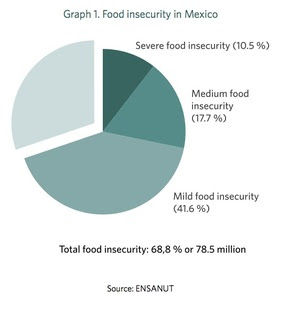 Click to enlarge
The ENSANUT report found that between 1988 and 2012, the proportion of overweight women between the ages of 20 and 49 increased from 25% to 35.5% and the number of obese women in this age group increased from 9.5% to 37.5%. A staggering 29% of Mexican children between the ages of 5 and 11 were found to be overweight, as were 35% of the youngsters between 11 and 19, while one in ten school age children suffer from anaemia.
The level of diabetes is equally troubling. The Mexican Diabetes Federation says there are 6.5 million to 10 million people who suffer from diabetes in Mexico, with around two million of them unaware that they have the disease. This means that more than 7% of the Mexican population has diabetes. The incidence rises to 21% for people between the ages of 65 and 74. Diabetes is now the third most common cause of death in Mexico, directly or indirectly. In 2012, Mexico ranked sixth in the world for diabetes deaths. The specialists predict that there will be 11.9 million Mexicans with diabetes by 2025”.
Obesity and diabetes function together, interacting so strongly that a new name has emerged: “diabesity”.

The various free trade agreements that Mexico has signed over the past two decades have had a profound impact on the country's food system.


NAFTA triggered an immediate upsurge of direct investment from the US into the Mexican food processing industry. In 1999 “US companies invested $5.3 billion in Mexico's food processing industry [in 1999], a 25-fold increase from $210 million in 1987, and more than double the $2.3 billion in the year before NAFTA,” says researcher Corinna Hawkes. Between 1999 and 2004, “approximately two thirds of the $6.4 billion FDI in Mexican agricultural and food industries was from the United States. Nearly three-quarters of FDI was into the production of processed foods, and it stimulated considerable growth of the sector. Between 1995 and 2003, sales of processed foods expanded by 5–10% per year in Mexico.”

Sales of baked goods, dairy products, snack and junk foods rose faster than any other category, especially soft drinks. Servings of 8 oz. soft drinks rose from 275 per person per year in 1992 to 487 servings per person per year in 2002.
Mexico is now one of the ten biggest producers of processed food in the world, and all of the largest transnational processed food corporations, such as PepsiCo, Nestlé, Unilever and Danone, have expanded their major Mexican operations. These companies are making big money. Total sales of processed foods in Mexico was $124 billion in 2012, and processed food corporations pocketed $28.33 billion in profits from these sales, 46.6% [nearly $9 billion] more than in Brazil, Latin America's largest economy.

One of the reasons why the big food corporations are so confident of their capacity to increase sales despite the new tax, is the high level of control they exercise over food distribution. This was NAFTA's “second effect” on the Mexican food system: an “explosive” growth of chain supermarkets, discounters and convenience stores, “from less than 700 to 3,850 in 1997 [alone], and 5,729 in 2004”. The success of Wal-Mart – now the “nation's leading retailer” – and other supermarkets, is surpassed only by the growth of the “convenience store chains” (selling “a limited number of convenience items 24 hours a day”).
In these emerging patterns of retail distribution, huge supermarkets are, of course, important because they concentrate goods, but a crucial aim is to replace the corner shops (the “tienditas”), aggressively taking over former independent territories of trade.

After hearing hundreds of testimonies from around the country, the international jury of the Peoples Permanent Tribunal, held in México city in November 2013, concluded:


Mexico could recover its self-sufficiency in food if there was official support for peasant agriculture backed with amounts comparable to the support granted to the big corporations. One of the necessary conditions for this would be the reconstitution of the instruments of support for the countryside that were disabled by NAFTA. The loss of food sovereignty directly caused by this array of policies has, as its main component, induced changes in the Mexican diet, with catastrophic effects.

While Via Campesina argues that the most important component of food sovereignty is autonomous food production and that the people themselves should define what they eat, in Mexico governments, corporations and the media have jointly promoted a costly campaign to boost consumer habits that, under the cover of modernisation, have been systematically destroying the food preferences of Mexicans.


This is capitalism. It is global with related problems the world over. The will of the people, self-determination, can only come from a collective decision to overthrow the system itself. Solidarity for world socialism.