Working families led by blacks and Hispanics are now twice as likely as those headed by whites and Asians to be poor or low-income, a gap that only widened since the recession began, according to an analysis of Census data in a new report by the Working Families Project, which promotes family-friendly policies in the states.

US Census bureau data for 2013 shows that 10.6 million out of 32.6 million US working families have incomes under 200 percent of the official poverty level, not making enough money to cover basic household expenses.

Working families were defined as those whose members collectively worked three out of four weeks throughout the previous year. The 200 percent poverty threshold in 2013 was $47,248 for a four-person family with two children.

White Americans still made up the largest single group among the working poor, at 4.4 million, or 23 percent. But 55 percent of working Latino families, and almost half of African-American and Native American families, were low income. Furthermore, over a third of African-American and Latino working families fell into the lowest income bracket, earning less than $32,000 a year. There was a 25 percentage point gap between white and minority low-income families, an increase of two percentage points since 2007.

Of the 24 million US children that live in poverty, 14 million – three out of five – are “children of color,” says WPFP. “Eliminating racial/ethnic poverty gaps would potentially reduce the number of children in poverty by 45 percent in 2050, compared with the projected number of poor children if current disparities persist,” the report claims.

Poverty in Ohio is the highest since 1960, and about half of Ohioans are one paycheck away from not making ends meet.  3 million students in Texas public schools who are economically disadvantaged. Six out of 10 public school students in Texas live in or nearly in poverty, according to a recently released report from the Southern Education Foundation.

More than half of the nation’s public school students were from low-income families. 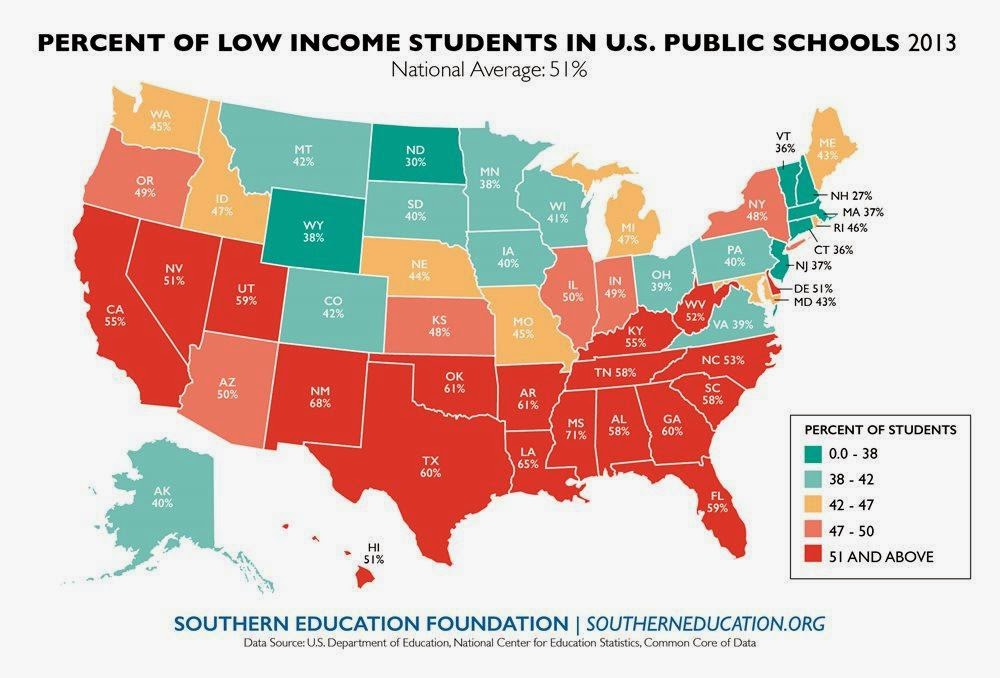 Posted by ajohnstone at 2:39 am