Watch out for what you wish for 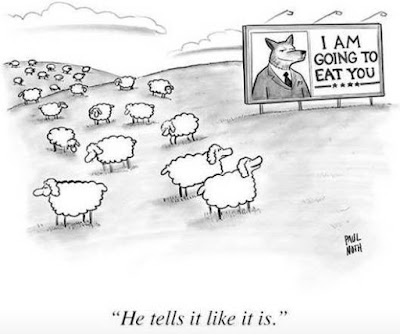 Trump may have lost the election, but he was not the aberration in the history of America that Biden-friendly media pundits would like us to believe.

Political commentator, Glen Greenwald, expresses what some have been saying about Trump and what others have been in denial about.

“There is nothing done by the Trump administration that can be rationally characterized as a radical aberration, some dramatic break, from U.S. tradition. Quite the contrary: none of Trump’s actions and policies are in some new universe of savagery, lawlessness, or radicalism when compared to those who preceded him in power…When it comes to lawlessness and authoritarianism, what are the actions and policies of the Trump administration that compete with, let alone dramatically surpass, these radical seizures of unchecked power by the administrations which preceded him?”

Correspondent Patrick Cockburn has pointed out:

“Trump’s supporters did not choose him because they were hoodwinked about what he stood for, but because they wanted his lies to be true, shared his antagonism towards non-white people, and dismissed his incompetence as a media exaggeration or blamed its worst consequences on others. Most of the Trumpian constituency – half of America – demonstratively backed him…”

"If we don’t understand Trump to be a symptom, we will be missing the lethal disease”

The  popular rejection of Donald Trump and the expected “blue wave” never came. In this election at least 70 million Americans voted for Trump who out-performed his own showing in 2016 by millions of votes. They supported Trump no matter what he had done or said. He could have moved even further extremes and they would still have have been behind him. Incredibly even with the repression of Black Lives Matter, Trump’s African-American vote rose, as did his Latino voters on the Texas-Mexico border. If there had been no pandemic, Trump may well have triumphed in the November polls. If the Republican senate had passed a lavish stimulus package, Trump may have succeeded for his second term.

The liberals and the left proposed no alternative to Trump other than Biden’s return to “normalcy”, to put the clock back to the Obama’s time in office, and ignore all its failings. Biden is and always has been straight-jacketed by Wall St. corporations. Jonathan Cook couldn’t have put it better when he wrote an article titled “The Task of ‘Sleepy Joe’ is to Put Liberal America Right Back to Sleep”

Current affairs observer, Binoy Kampmark, tells us that “What this election victory for Biden promises is a eunuch presidency, one weak and emasculated before it begins.”

The growing grass roots movements such as the Justice Democrats aspire to a real political force but already the Democratic Party machine are using their “progressive” policies as scapegoats for the lack of strong showing in the election and the lack of a landslide. Biden does not require the support of the progressives. He has the Republicans to appeal to and at his Democratic nomination that priority was clearly seen with the number of Republican speakers and the generous time allotted to them.

Members of the World Socialist Movement warned against voting for the lesser evil in this election, that such a tactic invariably leads to conciliation with the greater evil.

We require a politics that explains the real causes of people’s misery and offers a permanent solution rather than some short-term fix. Our case may not be quickly accepted and might be rejected by many but our alternative is out there to decided upon by our fellow-workers.

Posted by ajohnstone at 6:21 pm