The new CEO of capitalism 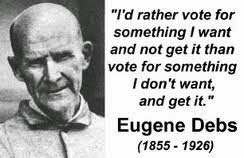 The Socialism Or Your Money Back blog is not averse to publishing the views of rival political parties if they present a case with which we can broadly agree with.

Roger D. Harris of the Peace and Freedom Party makes another plea on the Dissident Voice website for working people not to vote for the lesser evil in tomorrow’s presidential election.

Harris is critical of leftists who have “advocated temporarily subordinating an independent working-class alternative to campaign for the leading neoliberal candidate.”

He points out that the leftist influence will be minimal in achieving victory for Biden but that it will “legitimize his neoliberal rule.” As he later indicates, “Folks who campaigned for the new CEO of the capitalist world on Tuesday may not be as convincing when they start organizing against him on Wednesday.”

Harris is also skeptical of the hyperbole of some on the left who are spreading the fear of a possible Trump coup. He approvingly quotes Ajamu Baraka of the Black Alliance for Peace:

“Why would the ruling class risk a revolt and support a Trump coup and what elements of the state would support it? What childishness!”

In his article Harris tells us not to expect too much from a President Biden,  ”…the victorious Democrats will not be returning any favors to their leftist supporters, who counselled us to subordinate other progressive struggles to “the most important goal” of campaigning for Biden...”

We can fully understand and accept when Harris explains, “Differences exist between the pretenders to the Oval Office, but those differences do not extend to which class they serve”, pointing out that “We should be celebrating splits in the ruling class and welcoming their internecine warfare. Polarization, rather than unity and harmony with the ruling class, is what class struggle is about.”

Our comrades in the World Socialist Party of the United States may not accept other aspects of the politics of the Peace and Freedom Party but we do share the idea that our fellow-workers must fully break with the Democratic Party and “fan the embers” of independent organizing and class action.