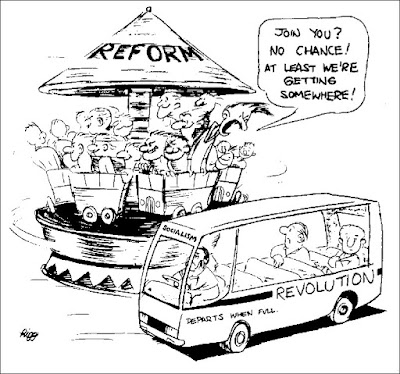 The World Socialist Party of the United States is an uncompromising working class political organization. It is fighting the battle of the wage workers of the world and stands for their welfare without qualification or evasion. Its demand is that all the means and instruments of production and distribution shall be used for the benefit of the actual producers of wealth, and that government shall be controlled by the workers and administered in their interest. Its platform is an honest and direct expression of working class demands, with a clear statement of the means proposed for their accomplishment. Unlike the platforms of the Republican and Democratic parties, the World Socialist Party platform is a plain and simple declaration of principles and policies which all may understand. It was not framed merely with a view to winning votes. Its utterances are straightforward and to the point. There is no ambiguity; no evasion of vital issues. There is no attempt to compromise with capitalism; no effort to throw a sop to the enemies of labor; no adherence to the miserable fiction that the interests of labor and capital are identical.

The World Socialist Party, in short, proposes to place society in possession of all the wealth it produces. The World Socialist Party does not disguise the fact that its ultimate aim is the entire abolition of rent, interest, and profit, and the common ownership and democratic operation of all industries. It will mean that the working class intends to use its political power, through the machinery of free elections, to force compliance with its demands by peaceful methods, to the end that wage slavery may be entirely abolished.

As long as the votes of working people are divided between the Republican and Democratic parties capitalism has nothing to fear, as both these parties are its equally subservient tools. Whichever of these parties is in power capitalism has nothing to fear. As a matter of fact there is no real difference between the Republican and Democratic parties. Both are supporters of the existing competitive industrial system and it is now impossible to tell a Republican from a Democrat by any policy that he favors or opposes. It is not going to make a vital difference to the capitalists whether the Republicans or the Democrats win this year. Why this attitude? Simply because it makes little difference to capitalism which one of its henchmen is elected to office. As long as working people confine their political activity voting for the candidates of capitalist parties capitalism is safe, and the mere fact that one candidate may be defeated and another one elected makes no difference in the general result. The working class will obtain no relief through defeating Republicans simply to elect Democrats in their stead. In the exploiration of working people, the different warring wings of the capitalist political parties get together and harmonize their differences. The conservatives and radicals will separate into different parties, but both will stand opposed to any organized resistance.

A fallacy exists that the election of a Democrat in November 2020 would automatically benefit the movements for peace, democracy, social justice and racial equality. The ruling rich control both major political parties.  To grasp this reality is essential to understand that it is not just Trump or Biden working class forces are arrayed against, but the capitalist system itself. It is the nature of capitalism itself that puts profits before human needs . Both Democrats and Republicans stand shoulder to shoulder on the side of capitalism. In fact, that is what defines all capitalist politicians no matter what they call themselves.

The World Socialist Party oppose the Democrat and Republican parties as instruments of the rich. Hopefully, in not the so far in the future, a socialist party of, by, and for workers, will challenge in elections. That will be an electoral campaign worthy of support. In the meantime, build the socialist movement and oppose all capitalist candidates and parties.