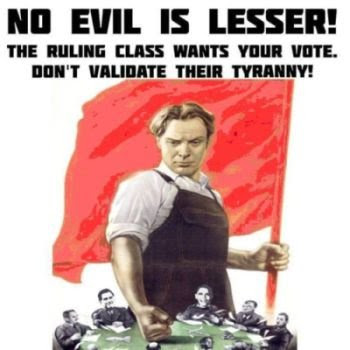 A capitalist government cannot change its spots. It is as it is and does as it does because it must. It represents capitalist interests against the great majority of people. It is able to perform miracles for the capitalists, but is powerless to implement the clearly-expressed wishes of the people.

Capitalism divides society into unequals. So long as one class continues to own the means of production, and another class owns nothing but its ability to work, which it is compelled to sell to the other class in order to live – the best government in the world, composed of the best men and adopting the best laws, cannot possibly establish equality between the two classes. If one class owns, it will always exploit and rule the class that does not own.

What then, is the government for? Government arose only with the development of private property. It exists in order to maintain this division. The government functions in the interests of the class that has the greater economic power, that is, of the owners of property. The government maintains the rule of the capitalists.

There are individual capitalists like Trump who are so narrow-minded that they act in such a way as to endanger the existence of all the capitalists. For example, they proceed against a very modest demand of the workers with such extreme violence as to arouse all the workers against all the capitalists, challenging the legitimacy of a capitalist government. They hold the position that the best way to handle the discontented is to bear down hard upon them, to keep the mob in its place.

Other capitalists, however, such as who Biden represents, are no less greedy but are more conscious of their class interests as a whole, and they intervene to restrain their more narrow-minded colleagues. In a period of crisis and unrest the capitalist class divides among itself. Some will take the position that their class interests are best served by offering some concessions to the people, out of fear that the people might otherwise take far more by direct action.

Each capitalist, or group of them, exerts the greatest possible pressure to swing the government to its point of view. Through the media they control, they try to bring to bear whatever “public opinion” they can. They make use of every legislator and government official under their influence or direct control. The capitalist government is an instrument for maintaining the power over society of the capitalist class and for suppressing the class that is ruled over, the workers.

Every class-conscious worker in America should boycott the coming election. A worker’s vote cast for any of the candidates is a wasted vote. Whether it be the Republican Party and Trump or the Democratic Party and Biden. IT IS A VOTE TO PERPETUATE THE CAPITALIST SYSTEM BASED UPON WAGE SLAVERY AND THE ROBBERY OF YOUR CLASS. IT IS A VOTE TO STRENGTHEN THE CAPITALISTS.IT IS TIME THAT AMERICAN WORKERS WAKE UP TO THE REAL FACTS!

A vote cast in the coming election for any political party now in the field — is a vote in favor of the capitalist class and against the working class. The Republican and Democratic parties stand brazenly and openly for the capitalist class — whose economic interests they serve and represent. They strengthen the capitalist system and keep the working class chained in wage-slavery. Capitalist government is nothing but the concealed dictatorship of the our masters. Every worker should know that so long as the capitalist class owns and controls the media, the means of teaching and molding the minds of the workers — the workers cannot free themselves. The capitalist class owns and controls the means of creating and influencing opinion and in a thousand different ways it instills its class ideas into the minds of the workers. It poisons their thinking. It not only gets them to believe that capitalism is eternal and good, but that socialism is evil, unnecessary and impossible.

There a way out. We are not helpless. The people who work by hand and by brain, can freely participate in the construction of a new society, can socialize production under the control of working people, can organize the whole of production for the use of the people. The World Socialist Party (WSPUS) is the only party that stands for the emancipation for the working class from wage slavery. Members of the WSPUS will express their view in the coming election with a write-in vote where it is possible and elsewhere by spoiling the ballot paper. It will carry on its propaganda through its literature and the internet until the workers of America become class-conscious.