With the climate crises, the worse-case scenarios begin with the triggering of invisible climate tripwires known as tipping points.

"Climate tipping points are a game-changing risk -- an existential threat -- and we need to do everything within our power to avoid them," said Tim Lenton, director of the Global Systems Institute at the University of Exeter. "Just because tipping points are challenging to predict doesn't mean they can be ignored," Lenton said.

An analogy is to lean back in a chair balancing on two legs and there is a threshold beyond which you irrevocably crash to the floor. That portal between two stable states -- in this case, an upright versus a fallen-over chair -- is a tipping point, and Earth's complex, interlocking climate system is full of them. Planet-altering tipping points have different temperature thresholds. Scientists know these tripwires are there, but not exactly where they lie. More unsettling is how easily efforts to eliminate carbon pollution could be overwhelmed by the changes set in motion.

"We have seen a number of tipping points already in coral reefs and polar systems, and more are likely in the near term," the UN's Intergovernmental Panel on Climate Change (IPCC) said in a draft report on climate impacts, due out in February. "Abrupt responses and tipping points of the climate system... cannot be ruled out," the UN's climate science advisory body now warns.

In most cases, reversing the changes set in motion would be beyond the grasp of humanity for many generations, if not millennia.

"Planetary machinery -- the monsoon system, ocean circulation, the jet stream, the big ecosystems -- abounds with non-linear systems," referring to the potential for abrupt, dramatic change. "That means you have so many points of no return."

Scientists count about 15 significant tipping points in the planet's climate system. Some are regional, others are global, all are interconnected.

Those most vulnerable to global warming and closest to a point of no return are tropical coral reefs, the West Antarctic and Greenland ice sheets, alpine glaciers, Arctic summer sea ice and the Amazon forest.

Scientists cannot rule out the possibility that the AMOC will stall altogether, as it has in the past. If this happened, European winters would become much harsher and sea levels in the North Atlantic basin could rise substantially.

For example, accelerating melt-off from the Greenland ice sheet is almost certainly slowing down the conveyor belt of ocean currents known as the Atlantic Meridional Overturning Circulation (AMOC). This, in turn, could push Earth's tropical rain belt southward and weaken the African and Asian monsoons, upon which hundreds of millions depend for rain-fed crops. Scientists cannot rule out the possibility that the AMOC will stall altogether, as it has in the past. If this happened, European winters would become much harsher and sea levels in the North Atlantic basin could rise substantially.

Johan Rockstrom, PIK director, said a 2C cap on warming was "not a social or economic choice, it is actually a planetary boundary. The moment that the Earth system flips over from being self-cooling -- which it still is -- to self-warming, that is the moment that we lose control."

Climate scientists fear tipping points (maybe you should too) - France 24 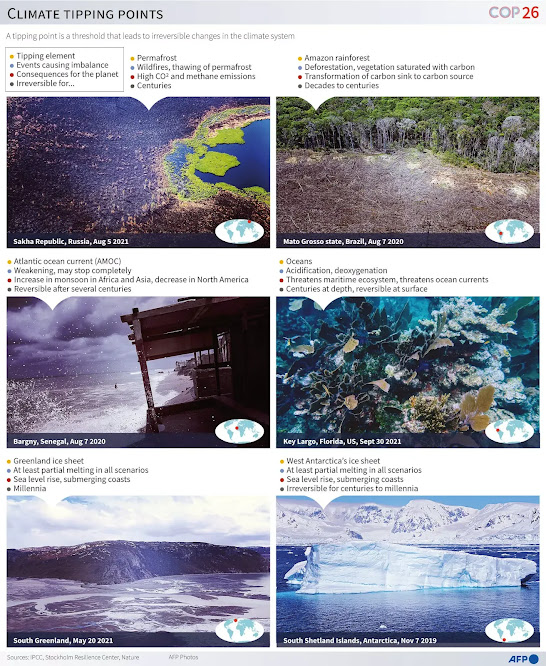 Posted by ajohnstone at 2:30 am