Climate - On Track to Failure 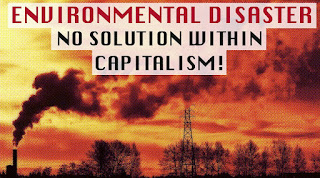 National plans to cut carbon fall far short of what's needed to avert dangerous climate change, according to the UN Environment Programme Emissions Gap report.  The world is on course to warm around 2.7C with hugely destructive impacts.

The Emissions Gap report looks at the nationally-determined contributions (NDCs) or carbon-cutting plans that countries have submitted to the UN ahead of COP. These pledges run up to 2030 and have been submitted by 120 countries.

The report finds that when added together, the plans cut greenhouse gas emissions in 2030 by around 7.5% compared to the previous pledges made five years ago. This is nowhere near enough to keep the 1.5C temperature threshold within sight. To keep 1.5C alive would require 55% cuts by the same 2030 date. That means the current plans would need to have seven times the level of ambition to remain under that limit.

"Climate change is no longer a future problem. It is a now problem. To stand a chance of limiting global warming to 1.5C, we have eight years to almost halve greenhouse gas emissions: eight years to make the plans, put in place the policies, implement them and ultimately deliver the cuts," said Inger Andersen, executive director of Unep. "The clock is ticking loudly."

Many of the net zero goals are ambiguous, say the authors - particularly among the world's 20 richest nations, where a dozen long-term plans are said to be quite vague. Many delay significant cuts until after 2030, raising serious doubts about whether they can really deliver net zero just 20 years later.

China and India are still to publish their plans, and several other governments – including Russia, Brazil, Australia and Mexico – had proposed weak plans that were no improvement on their 2015 Paris pledges.

Joanna Depledge, of the Cambridge Centre for Environment, Energy and Natural Resource Governance, said: “The picture painted by the report is grim: less than half of the NDCs are genuinely more ambitious than the first round submitted in 2015 or 2016 … and even more troubling is an implementation gap – many large emitters are not even on track to meet their existing pledges.”

The world has also squandered the opportunity to “build back better” from the Covid-19 pandemic.

"The huge sums spent to recover economies from Covid-19 are a once-in-a-generation opportunity to boost low-carbon technologies and industries. In most cases, this opportunity is not being taken," said Brian O'Callaghan, project manager of the Oxford University Economic Recovery Project, and an author on the Unep report. "This is a particular slap in the face for vulnerable nations who are suffering the worst consequences of climate change…we remain without a commitment from the highest emitters to cover the loss and damage that they have brought on the world."

World has wasted chance to build back better after Covid, UN says | Climate crisis | The Guardian

Posted by ajohnstone at 4:17 pm