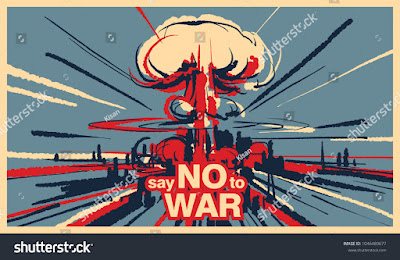 For many, the threat of annihilation from global nuclear war has been replaced by the global warming crisis and the protestS of the past to eliminate nuclear weapons have all but disappeared. All the nuclear-armed nations are modernising their capacity to wage nuclear war.

According to a report entitled Profiteers of Armageddon: Producers of the next generation of nuclear weapons, authored by William Hartung, director of the Arms and Security Program at the Center for International Policy, US decades long "nuclear modernization" plan will cost up to $2 trillion. The U.S.A. is embarking upon a plan to build the next generation of nuclear-armed bombers, missiles, and submarines as well as warheads.

The modernization plan "ignores the fact that building a new generation of nuclear weapons at this time will make the world a more dangerous place and increase the risk of nuclear war while fueling the new arms race," Hartung explains.

The U.S. nuclear weapons budget has climbed in recent years to over $43 billion in the Biden administration's proposed budget for  2022, and warns that "this figure will grow dramatically," pointing to a Congressional Budget Office (CBO) estimate that parts of the Pentagon's plan "will cost tens of billions each over the next decade, including $145 billion for ballistic missile submarines, $82 billion for the new Intercontinental Ballistic Missile (ICBM), and $53 billion for the new nuclear-armed bomber."

"And the costs will not end there," the report continues, noting that "the estimated lifetime cost of building and operating the new ICBM is $264 billion."

"A handful of prime contractors" are the initial recipients and main beneficiaries of public money spent on bombers, missiles, and submarines, "the funds trickle down to subcontractors" that often include other prominent companies. The report names firms such as Bechtel, General Dynamics, Honeywell, Lockheed Martin, Northrop Grumman, and Raytheon.

From 2012 to 2020, campaign contributions from contractors mentioned in the brief topped $119 million, more than a quarter of which was in the 2020 cycle alone. They also spent $57.9 million on lobbying last year, employing 380 lobbyists, over two-thirds of whom "passed through the 'revolving door' from top positions in Congress, the Pentagon, and the Department of Energy to work for nuclear weapons contractors as executives or board members."

"And it should be noted that the revolving door swings both ways," the report adds, noting that "three of the past five secretaries of defense worked as lobbyists or board members of major nuclear weapons contractors before taking up their positions in the Pentagon: James Mattis (General Dynamics); Mark Esper (Raytheon); and Lloyd Austin (Raytheon)."

"It's long past time that we stopped allowing special interest lobbying and corporate profits stand in the way of a more sensible nuclear policy," Hartung says.

'Profiteers of Armageddon': Report Reveals Who Benefits From US 'Nuclear Modernization' Plan (commondreams.org)

Posted by ajohnstone at 1:46 am