Socialists have always been green

Over the coming days, cllimate change will once again become a major political issue to discuss and debate. What is needed is an alternative solution outside of the capitalist mindset of the politicians and the protesters, one that takes into consideration the ownership and control of our productive processes; in short the social ownership of the means of life. Only then will we be able to address solutions which will not only benefit all of humanity but also the global environment. To find an effective solution, awareness, and indignation about a problem must be accompanied by an understanding of its cause. Some eco-activists blame modern technology rather than the use — or, more accurately, the abuse — that is made of it under the present system. Many others attribute pressure on resources and the environment to overpopulation and that humans are too greedy. They preach a gospel of restraint on consumption. Yet being in harmony with nature does not mean abandoning modern technological knowledge and regressing to pre-industrial levels. What it means is using materials and applying methods compatible with a balanced functioning of nature. With appropriate modification, modern industrial techniques of production are quite capable of providing enough food, clothing, and shelter for every person on Earth and of doing this without damaging the environment.

Nature and the environment are being damaged today because the productive activity is oriented towards the accumulation of profits rather than towards the direct satisfaction of human needs. The economic mechanism of the profit system can function in no other way. Profits always take priority both over meeting needs and over protecting the environment. This is why the Earth's resources have been plundered throughout the history of capitalism without a thought for the future, why chemical fertilisers and pesticides are used in agriculture, why animals are injected with hormones, why power stations and factories release all sorts of dangerous and noxious substances into the air and water, why waste is not recycled, why goods are made not to last. The list of anti-ecological practices under capitalism because it is more profitable is endless.

Reforms under capitalism, no matter how well-meaning can never solve the environmental crisis and the conclusion is clear - capitalism must go. It must be replaced by a socialist society based on the common ownership and democratic control of the means of production. Only on the basis of common ownership can the aims of the ecologists be achieved. Only in a society in which goods are no longer produced for profit can the problems of pollution and adulteration be eliminated. Only in a society where goods are no longer produced for sale can high-quality, long-lasting goods be produced. Only, finally, on the basis of the common ownership of the earth’s resources can humans restore the balance which capitalism has upset between them and nature and live in harmony with their natural environment, live ecologically if you like

It is obvious to those in the World Socialist Movement that today human needs are far from being met on a world scale and that fairly rapid growth in the production of food, housing and other basic amenities would still be needed for some years even if production ceased to be governed by the economic laws of capitalism. However it should not be forgotten that a socialist "steady-state economy" would be a much more normal situation than an economy geared to blindly accumulating more and more means of production. After all, the only rational reason for accumulating means of production is to eventually be in a position to satisfy all reasonable consumption needs. Once the stock of means of production has reached this level, in a society with this goal, accumulation, or the further expansion of the stock of means of production, can stop and production levels be stabilised. Logically, this point would eventually be reached, since the consumption needs of a given population are finite. So if human society is to be able to organise its production in an ecologically acceptable way, then it must abolish the capitalist economic mechanism of capital accumulation and gear production instead to the direct satisfaction of needs.

In the 19th Century that supposed dry crusty old economist Karl Marx was writing on the declining fertility of soil under capitalism. From Capital, volume 1, on "Large-scale Industry and Agriculture":
“Capitalist production collects the population together in great centres, and causes the urban population to achieve an ever-growing preponderance. This has two results. On the one hand it concentrates the historical motive force of society; on the other hand, it disturbs the metabolic interaction between man and the earth, i.e. it prevents the return to the soil of its constituent elements consumed by man in the form of food and clothing; hence it hinders the operation of the eternal natural condition for the lasting fertility of the soil...But by destroying the circumstances surrounding that metabolism...it compels its systematic restoration as a regulative law of social production, and in a form adequate to the full development of the human race...All progress in capitalist agriculture is a progress in the art, not only of robbing the worker, but of robbing the soil; all progress in increasing the fertility of the soil for a given time is a progress toward ruining the more long-lasting sources of that fertility...Capitalist production, therefore, only develops the techniques and the degree of combination of the social process of production by simultaneously undermining the original sources of all wealth—the soil and the worker.”

Marx  emphasised  it was both necessary and possible to rationally govern human relationships with nature, but this was something "completely beyond the capabilities of bourgeois society." In a future society of freely associated producers, however, humans could govern their relations with nature via collective control, rather than through the blind power of market relations. There was a need for planning and measures to address the division of labor and population between town and country and for the restoration and improvement of the soil. Marx’s asserted that a concept of ecological sustainability was of very limited practical relevance to capitalist society as it was incapable of applying rational scientific methods and social planning due to the pressures of competition.

Land in capitalism is a commodity as Engels explains:
“To make earth an object of huckstering — the earth which is our one and all, the first condition of our existence — was the last step towards making oneself an object of huckstering. It was and is to this very day an immorality surpassed only by the immorality of self-alienation. And the original appropriation — the monopolization of the earth by a few, the exclusion of the rest from that which is the condition of their life — yields nothing in immorality to the subsequent huckstering of the earth.” (Frederick Engels, Outlines of a Critique of Political Economy)

As he also pointed out elsewhere this drive for profit can lead to ecological catastrophe:
“ What cared the Spanish planters in Cuba, who burned down forests on the slopes of the mountains and obtained from the ashes sufficient fertilizer for one generation of very highly profitable coffee trees--what cared they that the heavy tropical rainfall afterwards washed away the unprotected upper stratum of the soil, leaving behind only bare rock!”

Marx offers a vision of the nature of a future society in Capital, Volume 3: 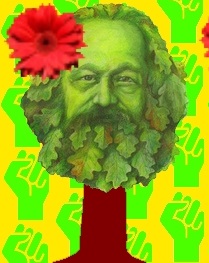 “From the standpoint of a higher socio-economic formation, the private property of particular individuals in the earth will appear just as absurd as the private property of one man in other men. Even an entire society, a nation or all simultaneously existing societies taken together are not owners of the earth, they are simply its possessors, its beneficiaries, and have to bequeath it in an improved state to succeeding generations, as boni patres familias [good heads of households].”
Posted by ajohnstone at 6:00 pm