Only Socialism is Sustainable 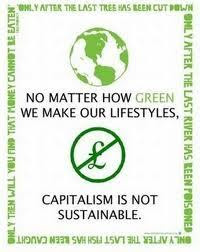 A socialist society requires that production as a whole should meet the needs of people and be sustainable for the rest of nature.  In other words, what humans take from nature and dispose of them after use, should all be done so as to leave nature to go on supplying and reabsorbing those materials after use. In the long run this implies stable consumption and production levels. Production would be simply to meet current needs and to replacing and repairing the stock of means of production. The only rationale for accumulating means of production would be to be in a position to satisfy all reasonable consumption needs, not as at present to manufacture ‘wants’ for marketing and profits.  Once achieved then further expansion of the stock of means of production, could stop and production levels be stabilised. The proportion of people’s time devoted to ‘production’ would be correspondingly reduced and stabilised, leaving them free to indulge in whatever pursuits they fancied. So if human society is to be able to organise its production and other activities in an ecologically acceptable way then it must abolish the capitalist social, economic and political system of profit accumulation and replace it with a system which gears production to the direct satisfaction of needs.

In a society oriented to meeting needs the concept of profits would be meaningless, while the imperative to ‘growth’ would disappear.  Instead, after an initial period of increase in useful production to provide the whole world’s population with basic amenities, production can be expected to reach a level sufficient to provide for people’s current needs and the future viability of their society. A sustainable relationship with the rest of nature could be achieved. Needs on a world scale could be in balance with the capacity of the biosphere to renew itself after supplying them. As the only life-form that can act in a way conscious of the wider impact it can have on other species and on the planet as a whole, humans have the potential to act as planet’s ‘brain’, consciously regulating its function in the interest of present and future generations. But before we can hope to play this role we must first integrate our own activities into a sustainable natural cycle on a planetary scale. This we can do only within the framework of a world socialist society in which the Earth and all its natural and material resources have become the common heritage of all humanity.

We humans are part of nature, not external to it. We are one with nature; we must nurture it if it is to sustain us. Socialists work for a revolution in society from world capitalism to world socialism. The revolution we want is a social revolution that will change the basis of society from the present monopoly of productive resources by rich individuals, corporations and states into one where the Earth and its resources belong to none but will have become the common heritage of all humanity. This revolution can only be carried out democratically by the majority class in society, those forced to work for a wage or a salary in order to get a living, with a view to freeing themselves from exploitation for profit and from the restrictions and problems that the capitalist profit system imposes on them. At the same time socialists understand that such a revolution has also to achieve a sustainable relationship between human society and the rest of nature. Together we can be architects of the future rather than victims of the present.