Of all of the work-related deaths recorded each day (7,500 according to the International Labour Organization, or ILO), less than 14 percent occur at the workplace. The vast majority (approximately 6,500) were the result of long-term physical (circulatory, respiratory, professional cancer) or mental illness. Stress has become almost as common at the office as the coffee machine. It is the second most common workplace health problem and is responsible for half of all absences. It is most common in the service and care sectors, jobs with a high percentage of female employees, where relationships with people can be exhausting.

“Psychosocial risks are the great pandemic of this century and they are related to the precarious conditions of the labour market,” warns Ana García de la Torre, secretary of occupational health of Spain’s General Union of Workers (UGT). According to UGT, “psychosocial risks are still not included in the catalogue of professional illnesses.” For this reason, many companies do not include them in their risk analyses and they are ignored in medical examinations.

Work-related stress is primarily the result of overwork and an increase in the use of technology. According to the ILO’s most recent health and safety report, 36 percent of the world’s employees work too much (more than 48 hours a week), and all of this overtime puts them at risk.

Job insecurity, precarious contracts, and low wages have created a new category of working poor. Today, in addition to earning low wages, they are also more likely to become sick or injured.

José Antonio Llosa, PhD in Psychology at the University of Gijon, explains, “This flexibility and mobility, this extreme and constant obligation to leave your zone of comfort without any type of security results in extreme physical and emotional exhaustion. Job insecurity is linked to poor mental health outcomes with higher rates of depression, anxiety and despondency. It also impacts the way people organize their lives and frustrates their plans,” says Llosa, who is participating in a research project on precariousness and mental health, also warns of a direct link between job insecurity and drug consumption and between perpetual uncertainty and thoughts of suicide. “Obviously suicidal thoughts do not necessarily equate to attempts, but they are indicative of a very deep malaise.”


“The number of accidents has increased in absolute terms and in severity since 2013, coinciding with increased labor flexibility,”Ana Isabel Mariño, labour and social security inspector, in reference to the figures for workplace accidents in Spain.

The most vulnerable workers are those employed on a temporary or casual basis, those subcontracted through agencies and the false self-employed. ILO data shows the rate of accidents for these employees to be much higher than for any others. In addition, they are hired to do the most dangerous work, have less access to training, are more susceptible to harassment and generally have a harder time asserting their rights. They are consistently faced with a choice between health and work, between enduring pain or running the risk of not being called back.

Workers for digital platforms and in particular delivery workers and messengers who are forced by multinational companies to declare themselves self-employed in order to receive a salary. This is why many of them lose their rights, including risk prevention, in a dangerous occupation.

“We receive photos of accidents every day. We drive for shifts of three, four, five hours at a time, the probability of having an accident is high and the company puts us under constant pressure to arrive on time. In addition, we don’t receive any training in risk prevention,” complains Nuria Soto, spokesperson for the labor union Riders x Derechos, which represents delivery people in Barcelona.

Last May, a courier in Barcelona, 23-year-old Nepalese national Pujan Koirala, lost his life while making a delivery. Koirala did not have a work visa and was working under the account of another rider. According to Soto, such arrangements are commonplace. “There are tons of undocumented migrants renting or borrowing accounts. The company is aware of this but it suits them. These workers are the last to claim any rights.”

According to Riders x Derechos, since Koirala’s death, six other delivery workers have died in Europe and Latin America “and in none of these cases have the companies taken responsibility.” That’s why they are demanding to be recognized as salaried workers (several courts in Spain have already ruled in their favor) so they don’t have to continue risking their lives on a job-to-job basis as part of a working model that belongs to the 19th century rather than the 21st.

In the coming decades, the world will have to face major challenges when it comes to occupational safety, including an ageing population, technological risks, the toxic potential of nanomaterials, and climate change, as well as fundamental changes to the way that work is organized.

There is no point in designing algorithms to predict accidents when the labor market itself has become the primary risk factor. As Mariño insists: “The key to improving prevention is slowing down processes, better regulating hours, and curbing this insane competition.” Protecting workers is impossible in a market that is unrestrained and insecure by nature. 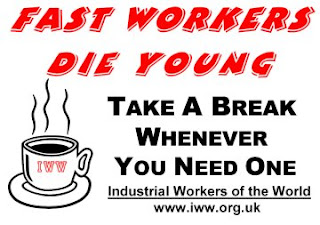