Socialists are seeking to establish a “steady-state economy” or “zero-growth” society, a situation where human needs are in balance with the resources needed to satisfy them. The modern world is a society of scarcity, but with a difference. Today’s shortages are unnecessary; today’s scarcity is artificial. More than that: scarcity achieved at the expense of strenuous effort, ingenious organisation and the most sophisticated planning. The world is haunted by a spectre – the spectre of abundance. Socialism means plenty for all. Socialism does not preach a gospel of want and scarcity, but of abundance. Yet for many environmentalists the assumption of abundance is regarded as far-fetched (which, we say it is not.) Environmentalists will argue that a world of abundance is not possible to sustain. Regardless of the radical rhetoric those eco-warriors still insist that we should work within today's parameters of capitalism, and push business leaders and their political retainers to implement far-reaching reforms which will inevitably impact upon profit margins. Their demands are setting out to impose on capitalism something that is incompatible with it. Such a strategy is exactly the route towards disillusionment and despair. Our lives are worth more than the profits of the corporations and the dividends of the wealthy. Let’s change the system.

It is not socialists don’t have the answers to the environmental problem. We actually do have the answers. It’s not a technical problem which cannot be solved. It’s about how do we take power from the people who currently have it and put it in our hands so that we can actually start implementing some of the answers that we know will work. Capitalist values permeate all the major institutions of the society, including scientific research. Socialists have been marginalised, and unable to penetrate the mainstream debate, thanks to this ideological bias. The economy as envisioned by most scientists remains versions of capitalist economics and they lack any serious critique of capitalism and continue to espouse either "liberal" or "conservative" views of the market. Scientific consensus assumes that the basic system of corporate production functions more or less efficiently, needing only the enlightened management and regulation of the state to curb its excesses and mitigate its shortcomings once they accept the scientific evidence. Yet the destructive impact on the natural world from human industrial and agricultural activity can no longer be afforded secondary concern in political economy. Such concepts such as "industrialism," "technology," and "carrying capacity" have been clearly conceived in a capitalist economic context, not operating beyond history and class. In response to environmental crises environmentalists must now rethink their vision of a future society.

There are few environmentalists who seek to solve ecological problems almost exclusively through either the silver bullets of geo-engineering technology or by extending the market to all aspects of nature, carbon trading and valorisation of the commons. Sustainable capitalism is a contradiction in terms. Green capitalism cannot be sustainable because every year every capitalist entity has to grow larger in a constant dynamic of capital accumulation. If a business does not expand, it dies. Every nation on the planet seeks to have a rise in its GDP or face a fall into a tailspin of unemployment and cuts to welfare spending. Capitalism is literally a system that is based on the maxim “grow or die.” So the idea that in any way that could be sustainable or that they could somehow care about the resources that they put in or the waste that goes out is an impossibility. Facing competition from rival businesses, each company must minimise its costs while maximising profit and market share. As environmental protection appears as a cost on the enterprises balance sheet it must be minimised. This fact operates independently of the personal views or ethics of CEO’s. If concerned managers implement costly environmental controls, they either sacrifice profit or lose market share to the competitor who can undersell at a cheaper price in the marketplace much to the displeasure of his investors. For this reason, pressures from the competitive market inevitably impede voluntary "green"capitalism.

Socialists aren’t against people taking personal responsibility for their life-styles, as consumers, why not recycle, reuse and repair? But it’s important to recognise that it distances us away from the product itself and the way it has been manufactured. We now become the problem because we don’t put it in the right coloured bin. This evades the whole question of why was that thing made in the first place to be disposable. If we can’t reuse it again, maybe we should never have made it in the first place. We feel individually good about recycling, but it focuses on consumption and takes the spotlight away from the production. If you look at waste statistics, very little of all waste is domestic, that is, what all of us produce. So even if we could magically get rid of all of that, that would still leave the vast amounts of industrial and agricultural waste. It would be irrelevant, in other words. Missing from the green view of the market is an adequate appraisal of the inherent logic within capitalism that necessitates environmental destruction. Every time capitalism messes something up, it doesn’t try and correct that problem, it just tries to sell you something else. So the food system has become so adulterated again that they invented another market called organic food and charge extra. Businesses are still willing to pander to the environmental consciousness of consumers if such a venture is profitable. Thus great sums are spent earmarked for advertising the allegedly green aspects of a particular commodity, even if such features must be fabricated as in the case of products in such labelling ploys as “100% natural”. Big-Ag know how to maximise profit from a person’s environmental concerns using false or misleading advertising than actual change to the production process.

There is no prospect of success unless revolutionary change for a just and sustainable society emerges from the periphery and social revolution is mirrored in movements for ecological liberation. Some may say this is an impossible goal and we should limit ourselves to achievable legislation and fiscal reforms but socialism and a sound ecological society are one, inseparable, indivisible.

Capitalism has failed too many times, yet we keep trying that. Socialism is now our last chance so why not try it. It’s not about buying green products. It’s about getting involved in politics. It’s the only thing we have. They have all the money but we have the numbers. What is urgently required is to get our power organised. We’re the people who make all. If we don’t go to work, nothing happens and nothing moves. Those concerned with environmental destruction must eventually confront the question of the global capitalist market system of production--is it to be embraced, regulated, or replaced? People must now not only ask themselves what kind of a planet they want to live on, but in what kind of a society they want to do it in. We should learn that live in symbiosis with this planet and all its life-forms. We do not act in a vacuum. So let’s make the most of our interconnection. 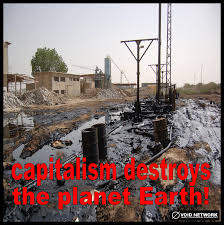