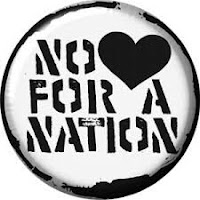 In opposing Scottish, Welsh and Irish nationalism, the Socialist Party make it absolutely clear that we stand in bitter hostility to the arrogant nationalism of the so-called Unionists. We oppose the explicit racism of those like the English Defence League who expound the cause of white nationalism. We stand in opposition to the Little Englanders.


All nationalist movements arises from a confused desire to see a united community. The aspiration to have a nation which belongs to you is in reality a desire to have a society which is yours — which you can feel a part of because it belongs to you. The same is true of Scottish and Welsh nationalism: these are not really movements by workers wanting Scottish and Welsh capitalists to dominate them — although that would be the effect of their unlikely success — but of alienated workers who want a society which they can call their own. Workers are right to want a society which we can call our own: a planet which belongs to humanity and local areas which we can take pride in as people who are no longer the tenants in a capitalist-owned world. To workers who are obsessed by nationalism The Socialist Party appeals with all of the passion which the nationalists use in their address to the working class: Come, let us unite as a class which has everything in common, everything to gain, a variety of cultures to develop — let us, indeed, have the world for the workers.

Socialists, whose country is the planet Earth, do not underestimate the importance of cultural diversity. The notion of the whole world conforming to one uniform way of life is far from appealing. It is the profit system, with its inevitable cultural imperialism whereby those with the dollars dictate what we listen to, how we speak, what we read and where we travel, which reduces culture to lifeless conformity to the cheap and nasty offerings of a culture industry.
Socialism is a global solution to a global problem. The problem is that the Earth and all its abundant resources belong to the minority, not to the human community as a whole. The minority abuse the planet Earth for the purpose of making profits. Socialism will end minority ownership and control, place the world in the hands of everyone and produce goods and services solely for need. This will require global organisation and not national fragmentation. Socialism will put an end to every border; nation-states will be abolished immediately.


Nationalism groups people according to their land of origin, as decided by the vicissitudes of history. Socialism groups people, poor against rich, class against class, without taking into account the differences of race, colour or language, and over and above the frontiers traced by accidents of history.

Posted by ajohnstone at 5:21 pm