By the end of the century, 13 million Americans will need to move just because of rising sea levels, at a cost of $1 million each, according to Florida State University demographer Mathew Haeur, who studies climate migration. Even in a “managed retreat,” coordinated and funded at the federal level, the economic disruption could resemble the housing crash of 2008. The Union of Concerned Scientists warns of a coming housing crash — from Miami to San Mateo, California — on a scale worse than last decade’s foreclosure crisis, caused by climate change — from flooding to heat waves and wildfires.

Florida accounts for 40% of the riskiest coastal land in the U.S., according to the Union of Concerned Scientists, but it’s done little so far to pull people back from the coasts.

About 6 million Floridians will need to move inland by century’s end to avoid inundation, according to Hauer, the demographer, in a 2016 paper. By then, about 80% of the nearby Keys, the archipelago that includes the tourist mecca of Key West, will be underwater. About 3.5 million people would be flooded in South Florida’s Miami-Dade and Broward, the two counties with America’s biggest exposed populations. Cities are only starting to grapple with where to resettle residents, and how to transport communities and hometown identities. And homes on higher ground will also demand higher prices, worsening an affordability crisis.

“Florida’s doing it at a really small scale,” said A.R. Siders, an assistant professor at the University of Delaware who studies climate adaptation. “Compared with the new housing units going up in South Florida, I don’t know if that would even cancel out. 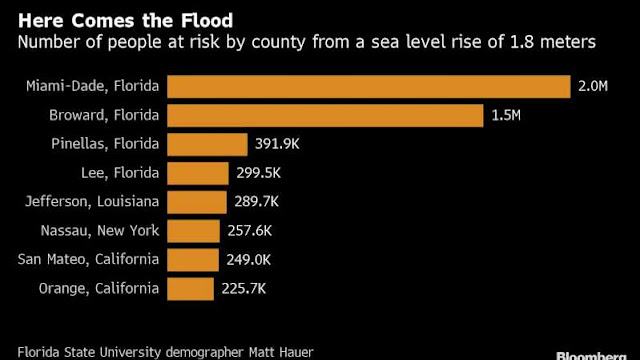 Posted by ajohnstone at 7:38 am