Preserve Capitalism Or Conserve the Planet


The world is increasingly at risk of “climate apartheid”, where the rich pay to escape heat and hunger caused by the escalating climate crisis while the rest of the world suffers, Philip Alston, a UN human rights expert has said.
Alston’s report said. “The risk of community discontent, of growing inequality, and of even greater levels of deprivation among some groups, will likely stimulate nationalist, xenophobic, racist and other responses.”
Alston said. “We risk a ‘climate apartheid’ scenario where the wealthy pay to escape overheating, hunger, and conflict while the rest of the world is left to suffer,” he said.

Socialism cannot exist without a change in consciousness resulting in a new approach and attitude toward humanity. The Socialist Party claims that although the viewpoint of working people is partisan, it is better than that of rich people for understanding reality. This is because working people are positioned by capitalism to see more than rich people do: they can grasp the actions of the rich and their own. Capitalism is an evil that calls for immediate destruction.
Billions around the world don’t have access to basic needs like clean drinking water, housing or education. The values socialists hold dear, such as the creation of a free and classless society and an economy that is environmentally sustainable and democratically-controlled by workers and communities, are those which are shared an overwhelming majority of the world’s population. If you want to know the real extremists, look no further than the supporters of global, corporate capitalism, those financial criminals who helped engineer the greatest economic catastrophe since the Great Depression and were bailed out by the governments they had bought, and now seek further tax cuts, more deregulation and have launched attacks on the rights of working people. These are the minority of pie in the sky, out-of-touch political zealots and fanatics. Socialists condemn capitalism because it has failed the vast mass of humanity in the most decisive way. It promises freedom, democracy and prosperity but defaults on all three. Capitalism's driving principle is the struggle between capitalists for commercial supremacy and competitive survival in the jungle of the misnamed "free market". Human needs are met only in so far as they are backed up by purchasing power. Thus, for instance, suppose you need somewhere to live: if you have money you'll get what you can pay for, otherwise you can die on the streets or throw yourself on charity. Socialism, expropriating the capitalist class and putting society's productive forces under social ownership and democratic control, would put a stop to this madness.

The growing global environmental crisis is in the opinion of many the greatest challenge mankind has faced. Species and entire habitats are disappearing at a pace unseen since the extinction of the dinosaurs. Natural resources are being consumed far faster than they can regenerate. It is already clear that climate change is leading toward catastrophic collapse of the natural systems that billions of people depend upon. These problems are not accidental, but are symptoms of the irrationality of our capitalist system of production and distribution. Greenhouse gases will increase as long as our economy depends on coal, oil and natural gas, controlled by some of the wealthiest corporations in history following the logic that accumulating profits over-rides all other concerns. Abandoning fossil fuel investments and converting the whole economy to the use renewable energy would impose huge costs on corporate bank balances. Coal-mining, petrochemical complexes, and oil and gas exploration and infrastructure are among the industries benefiting from the loans and guarantees, which cover projects in countries including Slovakia, Russia, Brazil, India, Germany, Norway, Vietnam, the Philippines and Saudi Arabia.

Under capitalism, decisions on what and how to produce are made by CEOs seeking to maximise return by raising sales figures and cutting costs. Individual lifestyle changes and some new technology may buy a little more time but are grossly insufficient to save the planet while capitalist industries are given free rein to continue polluting. Achieving an environmentally sustainable social system will require fundamental political and economic change.  The entire production system must be transformed; we must change the way society allocates its resources. We call such a system socialism which has at its material roots the inability of capitalism to solve humanity's problems.

We are approaching tipping points that if reached will give global warming a momentum that human actions will have little or no control over where human intervention will be unable to slow down and stop this process. Obviously civilisation as we know it will change drastically. It is easy to make a case that global warming is the preeminent challenge for humanity to tackle. Every new scientific finding makes it imperative to immediately recognise the need to reduce carbon emissions. This degradation of nature is a compelling argument for the new urgency of socialism - a society that protects people and the environment. World socialism will put the preservation of the ecosystems of the entire planet above the self-interest of nation-states and prevent widespread ecological collapse.

Freed from national rivalries this new society can share scientific knowledge and technology with unprecedented planet-wide cooperation of scientists and the involvement of local communities, learning from the experiences and insights of all people around the world. We depend for our survival on the natural world. We are linked with the natural world through complex evolutionary chains and through networks of ecosystems. There is now pressing time-line for our actions act. If we do not move quickly to stem climate change by protecting and preserving our fast-disappearing flora and fauna this planet could very well become uninhabitable for billions of people, and possibly all of humanity who may well also vanish from the face of the Earth.

Socialism makes it possible for us all to live lives worthy of human beings while at the same time living in harmony with our environment and heighten our determination to make the socialist revolution happen. Socialism requires a conscious collective decision about the lives we want to live and the communities we want to live in – and it takes a collective effort in that goal – in order to create truly sustainable communities–socially, economically, and environmentally sound. Even if you personally reduce, reuse and recycle the changes necessary are so large and profound that they are beyond the reach of individual action. Sadly, individual action does not work. It distracts us from the need for collective action, and it doesn’t add up to enough. Getting people excited about making individual environmental sacrifices is doomed to fail. The reality is that we cannot overcome the global threats posed by greenhouse gases without speaking the ultimate inconvenient truth: we need a socialist revolution.

It’s capitalism, a global system based on prioritising profits over people, which has brought us to the brink of a climate-induced catastrophe that can destroy humanity. In a world with billions of people living in poverty and exclusion, production is determined by the profit motive, not human needs. In a world with millions of unemployed or low-income workers, access (distribution) to wealth is conditioned to having a job. In a world of globalised market, there is no coordination to supply and what is produced. Instead there is a killer competition for profit between companies. There is no "sustainable capitalism". There is only "disaster capitalism". Green reformism – the default position of most environmental campaigners and thinkers, pursue change through existing structures and it does not seek to replace capitalism or challenge class structures. It isn’t revolutionary, but attempts to work with government and business interests to affect change. Ecological degradation is not halted; it is instead measured, monitored, and manipulated within capitalism.

Marx and Engels showed that capitalism is driven to constantly “revolutionise” industry and commerce, continually transforming the globe. This is not to satisfy basic needs or to genuinely improve the quality of life of the population. Capitalism seeks to create new needs, destroying what it built only yesterday and governments will continue to bend to capitalist interests. In contrast socialists seek all people, co-operatively and together, to be in control of their lives and work would be for the long-lived benefit of all, caring for the whole global ecology and all its inhabitants. Only mutual aid, not self-sacrifice, is enough to motivate real changes. People can build their collective knowledge through the organisations they need to advance their interests and build the confidence needed to take on capitalism as they win a larger hearing from more and more people, and make the socialist revolution possible. 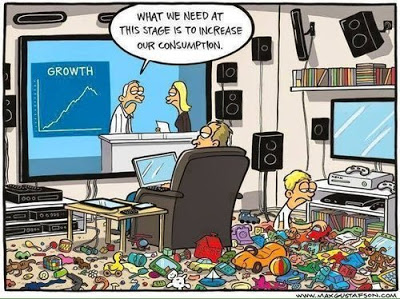