Our Planet. Our Future.

Environmental groups, including Extinction Rebellion, said they plan to shut down traffic in Washington, D.C., on Sept. 23 and endeavor to bring daily life to a standstill to demand action by U.S. politicians on tackling climate change.


15 groups planning the protest include traditional environmental groups like 350 DC and Friends of the Earth Action, as well as groups that focus on other issues, such as Black Lives Matter and Code Pink, a women-led group promoting peace and human rights.


Kaela Bamberger, an activist aligned with Extinction Rebellion DC, said the coalition plans to ratchet up pressure on policymakers by shutting down traffic at major intersections because rallies, marches and petitions have not worked.
“This is definitely a next-level action. The urgency of climate change warrants such an attempt to disrupt business as usual, to make it impossible for people with decision-making power to go about their daily lives as if we are not in the climate emergency.”

In contrast to the destructive anarchy of capitalist competition which reinforces the divides between countries, classes, and cultures, a cooperative worldwide commonwealth would put an end to the unchecked power and authority exercised by both governments and corporate powers. New techniques of transportation and communication should facilitate a world in which the entire population could be cooperating in the creation of the good society.

Of course, nothing of the kind is taking place. The main obstacle to reducing global warming is capitalism, where production is geared to profit, and production costs have to be kept to a minimum.  Attempts to tackle climate change in the context of a world market economy will, at best, achieve only limited results. In socialism, where production can be rationally organized according to human need, we'll have the best chance of successfully curtailing global warming. Capitalism simply does not provide a framework for the rational solution of the problem of threatened climate change.

We, the people, all over the world have been calling for this issue to be addressed for some time now. 'We' are paid little attention. 'They', corporations and lobbyists throw money at politicians so they also largely ignore public opinion. The capitalist system is bolstered by 'them' and 'their' main interest is in making more profit so 'we' have little hope of being heard on this and any other topic.  It's time to grasp the nettle and recognize the only action that can halt global warming is the total abolition of the system that allows and sustains this division of 'us' and 'them.' We are many, they are few. Together anything is possible. 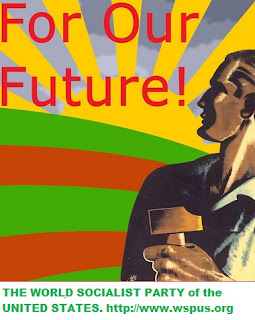