The young people are our hope


The environmental campaigner Greta Thunberg appeared before 25,000 people gathered at Berlin's Brandenburg Gate to protest the indifference to the threat of climate catastrophe.

Thunberg spoke for less than two minutes, and, despite her now-regular public appearances, her reluctance to be seen as a leader of a movement remains obvious. Nevertheless, the anger was audible in her words behind her reserved manner — as was her discomfort at being thought of as a "new hope."


"The older generations have failed in tackling the biggest crisis humanity has ever faced," Thunberg told the crowd. "When we say to them that we are worried about the future of our civilization, they just pat on our heads, saying: Everything will be fine, don't worry. But we should worry, we should panic, and by panic I don't mean running around screaming," Thunberg said. "By panic I mean stepping out of our comfort zones. Because when you are in a crisis you change your behavior. We want a future. Is that too much to ask for?"

Documents leaked ahead of an EU summit on climate change last week showed that the German government has not supported a European Commission-backed plan to decarbonize the bloc by 2050 — a key part of the strategy to limit global warming in accordance with the 2015 Paris climate agreement.

"We are here," the students in Berlin chanted. "We are loud because you are stealing our future!"

14-year-old Raphael explained, "I think we've been waiting for far too long for politicians to do something about it," he told DW.

One young speaker said there had been more than enough time to act, given that the facts about the impending climate disaster are much older than most of the people at the demo. "We're basically going on the streets because of facts that were recognised 40 years ago, and agreements that were made 30 years ago," she said.

The school students warn that unless adequate action to arrest global warming is taken within a short period it will be “too late.” The urgency of the warning, it is hoped, will rouse people from lethargy to activism. The Socialist Party says the same thing, with the important proviso that “adequate action” must mean, above all, the establishment of world socialism. If we do have a chance of survival, it is contingent on the establishment of world socialism. If capitalism continues indefinitely, then sooner or later we are doomed. The sooner we establish socialism the better. But better late than never. The environmental threat to human survival will come to occupy central place among the concerns that inspire people to work for socialism, overshadowing all else. 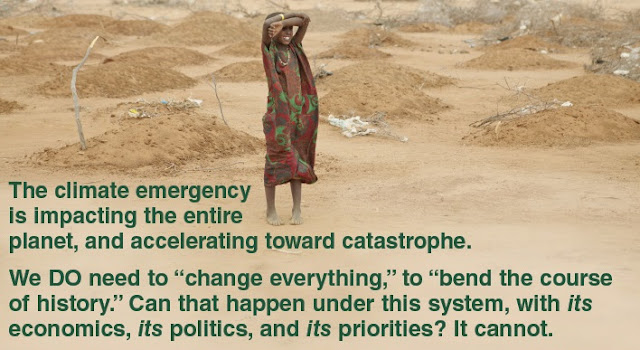