From Planetary Community to Universal Community 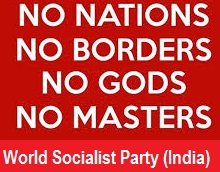 
The workers of the world are yet to unite to accomplish their over-a-century-long pending task of overcoming what Thorstein Veblen called “the predatory phase” of human development. They have yet to move on to the phase of “an association, in which the free development of each is the condition for the free development of all” (Karl Marx and Frederick Engels), by transforming human society from “a planetary community of production and consumption” (Albert Einstein) into a Universal Community of Scientific Beings – star-trekking beings. With the disappearance of classes from within liberated humanity, humans will leave behind their prehistory and enter into the realm of free history, as Marx envisaged.


Material abundance has been knocking at our door since about the beginning of the past century waiting for us to accept it and create a fulfilling life for the whole of humanity. What is still lacking is the working class’s will, unity, and action country-wise and worldwide. Their social consciousness remains crippled by glorification of power and success and all-pervading competition. This ongoing alienated cultural constitution, “crippling of the social consciousness of individuals” (Albert Einstein), has kept us arrested in a devastating “Escape from freedom” or “Fear of Freedom” (Erich Fromm). In the name of “freedom” what we are preoccupied with is “freedom from” (“negative freedom”) – bourgeois freedom – vulgar freedom – while what we need is to get hold of “freedom to” (“positive freedom”) – Socialist Freedom – real freedom – freedom to lead a peril-free harmonious and luminous humane life.


Progress in Science and Technology has given rise to Artificial Intelligence and Robotics which is making this freedom more and more viable nowadays.


To understand this point let us take a brief detour into the essence of capital. Capital as “self-expanding value” (V = c+v+s, where V = Value, c = constant capital, v = variable capital and s = surplus value), constantly coerces its personified functionaries, the capitalists, to look for maximum profit by raising the rate of surplus value (exploitation), i.e., by raising “s/v”, which pushes up the organic composition of capital or “c/v”, which reciprocally (tendentiously though) reduces the rate of profit “s/(c+v)”.


The very process that had given rise to value and exchange-value asserts itself via alienation and competition. The law of competition for accumulation leads to a progressively higher organic composition of capital (OCC), i.e. “c/v”, or a continual increase in its constant constituent “c” compared to its variable one “v”, a continual relative decrease in its variable vis-à-vis constant; or, to put it in a different way, a progressively higher technical composition of capital, i.e. “c/(c + v)”,  a continual increase in its constant constituent “c” at the expense of the total social capital “(c + v)”, constantly raising the social productivity of labour. “The immediate result of this is that the rate of surplus value “s/v”, at the same, or even a rising, degree of labour exploitation, is represented by a constantly falling general rate of profit “s/(c + v)”.” (Marx, Capital, Vol. III, Moscow 1974, pp. 212-13) This leads the capitalists to go in for countervailing measures to reverse the tendency by unceasing technological advancement. It is inbuilt in the market system that the rates of profits globally tend to be equalized via an averaging process, giving rise to an average rate of profit. Without this the bigger and bigger the OCCs, the lower and lower would be their own individual rates of profits. But why should a firm go in for a higher OCC at all? The raison d’être is that this averaging means that they can go on accumulating by extracting a  portion of global profits over and above their own individual profits from the profits of the industries and agriculture having lower OCCs.


True, Marx and Engels didn’t live to see the precise future course of scientific and technological developments and their specific forms of manifestation (artificial intelligence – robotics) which would emerge from the hectic pursuit of profit. They were dealing mainly with capital’s fledging period. So in capital’s ascending phase when the productive forces were developing within the womb of an expanding capitalist mode and relations of production, they could only anticipate the forthcoming historical trends. Marx’s materialist conception of history had imbued him with penetrating insight and profound predictive power whereby he brilliantly foresaw the impending state of affairs with their far-reaching consequences to occur. As he observed in 1858:


“Invention then becomes a business, and the application of science to direct production itself becomes a prospect which determines and solicits it. But this is not the road along which machinery, by and large, arose, and even less the road on which it progresses in detail. This road is, rather, dissection [Analyse] – through the division of labour, which gradually transforms the workers‟ operations into more and more mechanical ones, so that at a certain point a mechanism can step into their places. ... Thus, the specific mode of working here appears directly as becoming transferred from the worker to capital in the form of machine, and its own labour capacity devalued thereby. Hence the workers’ struggle against machinery. What was the living worker’s activity becomes the activity of the machine. ... the progress of technology, or the application of this science to production. ... Labour no longer appears so much to be included within the production process; rather, the human being comes to relate more as watchman and regulator to the production process itself. (What holds for machinery holds likewise for the combination of human activities and the development of human intercourse.) No longer does the worker insert a modified natural thing [Naturgegenstand] as the middle link between the object [Objekt] and himself; rather, he inserts the process of nature, transformed into an industrial process, as a means between himself and inorganic nature, mastering it. He steps to the side of production process instead of being its chief actor. ... his degradation therefore to mere worker, subsumption under labour. The most developed machinery thus forces the worker to work longer than the savage does, or than he himself did with the simplest, crudest tools. ... As the basis on which large industry rests, the appropriation of alien labour time, ceases, with its development, to make up or to create wealth, so does direct labour as such cease to be the basis of production, since, in one respect, it is transformed into a supervisory and regulatory activity; but then also because the product ceases to be the product of isolated direct labour, and the combination of social activity appears, rather, as the producer. ... just as the conquest of the forces of nature by social intellect is the precondition of the productive power of the means of labour as developed into the automatic process, on one side, so, on the other, is the labour of the individual in its direct presence posited as suspended individual, i.e. as social, labour. Thus the other basis of this mode of production falls away.” (Marx, Grundrisse, Penguin Books in association with New Left Review, 1981, pp. 704-709)


Horrific catastrophe – only 12 years to go?


Now that automation, artificial intelligence and robots are quite capable of performing almost all the world's necessary and useful laborious work, humanity is on the brink of a forthcoming Leisure Society, Marx's all-encompassing scientific society. Once we enter its knowledgeable domain, having emancipated mankind from their perilously degenerating slavery of capital, it will be indispensable for us to counter as far as we can the threat of extinction, especially in view of the catastrophic survival warning about having just 12 years in hand to deal with global warming, as reported on Monday 8 October 2018 by the Guardian, London: “We have 12 years to limit climate change catastrophe, warns UN – Urgent changes needed to cut risk of extreme heat, draught, floods and poverty, says IPCC [Intergovernmental Panel on Climate Change]. Overwhelmed by climate change? Here’s what you can do… The world’s leading climate scientists have warned there is only a dozen years for global warming to be kept to a maximum of 1.5C, beyond which even half a degree will significantly worsen the risks of draught, floods, extreme heat and poverty for hundreds of millions of people. … The authors of the landmark report by the UN Intergovernmental Panel on Climate Change (IPCC) released on Monday say urgent and unprecedented changes are needed to reach the target, which they say is affordable and feasible although it lies at the most ambitious end of the Paris agreement pledge to keep temperatures between 1.5C and 2C. The half-degree difference could also prevent corals from being completely eradicated and ease pressure on the Arctic, according to the 1.5C study, which was launched after approval at a final plenary of all 195 countries in Incheon in South Korea that saw delegates hugging one another with some in tears.” – https://www.theguardian.com/environment/2018/oct/08/global-warning-must-not-exceed-15c-warns-landmark-un-report


As also cited by the Bengali language newspaper in Kolkata the Anandabazar > International on 9 October 2018 (http://www.anandabazar.com/international/we-may-just-12-years-away-from-the-unprecedented-danger-1.878290#.W8gRT7dReSw.watsapp)


First, we are required to reduce and reverse the currently devastating emission levels of the  greenhouse effect gases – Water vapor , Carbon dioxide (CO2), Methane (CH4), Nitrous oxide (N2 O), Ozone (O3), Chlorofluorocarbons (CFCs), Hydrofluorocarbons (incl. HCFCs and HFCs)  – in order to avoid the threatening trends of ongoing global overwarming. The hostile climate catastrophe has to be dealt with by discontinuing uses of fossil fuels – coal, petrol, diesel, kerosene etc. and substituting solar and other forms of renewable energy. We have also to get rid of the perilous plastic pollution. We have to discontinue the destruction of forests together with their flora and fauna by substituting all the various uses of timber logs with fibreglasses and conserving and restoring our lost forests to create an eco-friendly atmosphere which will absorb and retard the swollen carbon emissions. This done, we will overcome the hazards over our present homeland – the planet Earth; we will be free from the fear of our species going the same way as the dinosaurs of extinction from the Earth’s environment. Not that global warming to levels, even well above the IPCC's threshold of a 1.5C addition to the current average global temperature, would threaten the human species with complete extinction. If high enough it would cause many millions of deaths but some humans would survive even if in very difficult conditions.


Later, as necessity is the mother of invention, even if we remove the current threat from global overwarming, circumstances – the exhaustion of the Sun – will eventually prompt us to realise that we need to get out of the periphery of Earth to explore for new homes elsewhere. As said Marx, “Circumstances make men just as much as men make circumstances.” Thus humans will have to make their circumstances anew once again. Just as our original hominid ancestors, after their emergence at c.300,000 to 200,000 years ago, driven by their survivalist exigencies had to migrate out of Africa into Eurasia and other lands, and eventually populate the whole of planet Earth, so, in view of our survivalist exigency, in order to shun extinction we will have to project a cosmic exodus as outer-space explorers in search of life-friendly environments  within stars with their planets, having to traverse the Universe to seek out suitable places for human habitations and build abodes away beyond the boundary of our planet Earth, transforming ourselves from a Planetary Community into a Universal Community.  Of course becoming star-trekking beings is a very long way off as it will be a few billions of years before the Sun begins to burn out. “Will the Sun Ever Burn Out? Yes, the sun will eventually burn out. But not for a long, long time. The sun has used up about half of its hydrogen fuel in the last 4.6 billion years, since its birth. It still has enough hydrogen to last about another 5 billion years.” (From space.com)  So this wouldn't be a way-out from a more immediate threat from global overwarming. But that time will eventually inexorably come.